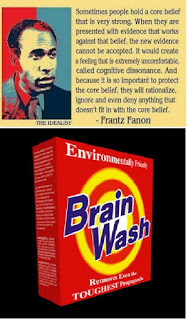 Cult Of The Illuminati: Why Smart People Often Can’t See The Truth

A Conspiracy Zone blog entry, "CULT OF THE ILLUMINATI: WHY SMART PEOPLE OFTEN CAN'T SEE THE TRUTH," suggests Cognitive Dissonance plays role in programming and mind control.   Psychiatrist Frantz Fanon captures essence of dissonance, "Sometimes people hold a core belief that is very strong.  When they are presented with evidence that works against the belief, the new evidence cannot be accepted.  It would create a feeling that is extremely uncomfortable, called cognitive dissonance.  And because it is so important to protect the core belief, they will rationalize ignore and even deny anything that doesn't fit in with the core belief." It boils down to facing truth, when it flies in face of individual's conception of world, may prove too disturbing and denied by the person's mind. The act of denial blocks disturbing thought little matter its genuine truthfulness or reality, resulting in termination of anxiety or upset state.  Ignorance is bliss?

"The easiest way is Repetition. Repetition is also heavily used by cults. The human mind is not a computer. It is a biological organ that can do some logical processing. It is actually more based on pattern recognition than on logic, and that’s something that cult leaders have learned (through pattern recognition) that works on people. Advertising and propaganda work the same way."

" To the undisciplined mind, repetition means truth," points out blog entry to make conclusion many people become unwitting victims of subtle process, "So, you see it’s not really that most people are stupid. It’s that most people get an “F” in Logic, critical thinking, discernment and wisdom. You can still function day to day, balance your checkbook, graduate from college, hold a job and make money and still have Cognitive Dissonance and thus be under severe mind control."

The clear conclusion is a loss of rational-thinking capacity.  Is it simply a pacification of everyone through encouraging passivity in front of a television, or simply, training oneself to avoid conflict or making waves?  It is, possibly, the simple truth - a dumbing down through loss of alertness - loss of mental capacity.   A subtle yet malevolent seduction to give up thinking for yourself!  Many youth may not develop much capacity for rational thought in face of these challenges? Is it such a bad thing?  Or, do you become a glazed over half drone?  Do you forfeit your humanity at that point?

It takes thinking and a plan to put into action to best serve your individual interests.  A loss of rational capacity represents a serious challenge to humanity!   The blog entry makes a final lament, "If the majority of WE THE PEOPLE are illuminati mind controlled zombies, America doesn’t stand a chance."