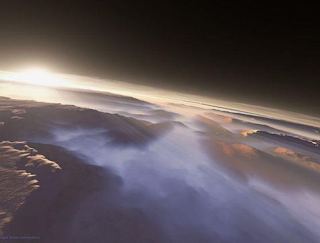 The Daily Galaxy reports rover Curiosity readings show Mars atmosphere still active! "Curiosity measures several variables in today's Martian atmosphere with the Rover Environmental Monitoring Station (REMS), provided by Spain. While daily air temperature has climbed steadily since the measurements began eight months ago and is not strongly tied to the rover's location, humidity has differed significantly at different places along the rover's route. These are the first systematic measurements of humidity on Mars." reports article.  There are variations in humidity, and the present writer wonders, if there are variations in thickness of Martian atmosphere?  Are there areas where atmosphere less depleted, e.g., in a valley?   "Martian Sky Is Blue," a past post, reveals a blue vista similar to Earth?  Are we conditioned to believe in an inhospitable and uninhabitable Mars?