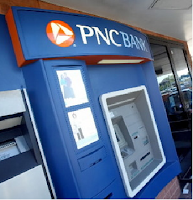 Pittsburgh newspaper website reports, "...cyber attack that one expert called the biggest of its kind to hit the
United States crippled PNC Financial Services Group’s website on
Thursday.  For the second day in a row, the Pittsburgh-based bank’s website fell
victim to a denial-of-service attack, in which a person or group directs
a flood of traffic to a website, overwhelming the system and preventing
customers from gaining access." A terrorist group has claimed responsibility for the PNC website denial of service attack. "A group calling itself the Cyber Fighters of Izz ad-Din al-Qassam claimed responsibility for the attacks on an Internet message board. It said the attacks, which also hit Bank of America Corp., Wells Fargo & Co., U.S. Bancorp and other large banks, were in retribution for a U.S.-made video mocking the Muslim prophet Muhammad. Some have cited the video as a reason for anti-U.S. protests in the Middle East in recent weeks."  You've got to love the hyperbole: "Connecticut Sen. Joseph Lieberman, an independent, said last week he believed the attacks came from Iran."  The present writer asks, "who's your boogeyman of choice?"