from dpa: The White House Friday moved to stem escalating cyber crime as threats to internet security and wireless technology grow at an alarming pace. US President Barack Obama announced the creation of a White House office that will coordinate protection of government security, financial systems, air traffic control programmes and other systems. The problem is 'the most serious economic and security challenge that faces the nation,' Obama said. In addition, the Pentagon is reportedly planning to create a new military command for cyberspace, The New York Times reported. But defence officials have not yet presented the plan to Obama, the newspaper said.

contractors vie for plum work, hacking for US

from nytimes: The government’s urgent push into cyberwarfare has set off a rush among the biggest military companies for billions of dollars in new defense contracts. The exotic nature of the work, coupled with the deep recession, is enabling the companies to attract top young talent that once would have gone to Silicon Valley. And the race to develop weapons that defend against, or initiate, computer attacks has given rise to thousands of “hacker soldiers” within the Pentagon who can blend the new capabilities into the nation’s war planning. Nearly all of the largest military companies — including Northrop Grumman, General Dynamics, Lockheed Martin and Raytheon — have major cyber contracts with the military and intelligence agencies. The companies have been moving quickly to lock up the relatively small number of experts with the training and creativity to block the attacks and design countermeasures. They have been buying smaller firms, financing academic research and running advertisements for “cyberninjas” at a time when other industries are shedding workers. The changes are manifesting themselves in highly classified laboratories, where computer geeks in their 20s like to joke that they are hackers with security clearances.

cybersecurity framework for total govt regulation & control
from paul joseph watson & kurt nimmo: The Obama administration’s new Cybersecurity system will only make the Internet more vulnerable to attack, while creating the framework for a massively upgraded government surveillance grid that will control and regulate every aspect of our daily lives through the implementation of “smart” technology. Obama’s announcement of the new cybersecurity grid dovetails with a recently introduced Senate bill, the Cybersecurity Act of 2009, that would hand the president the power to shut down the entire Internet in the event of a “cybersecurity” crisis. The bill’s draft states that “the president may order a cybersecurity emergency and order the limitation or shutdown of Internet traffic” and would give the government ongoing access to “all relevant data concerning (critical infrastructure) networks without regard to any provision of law, regulation, rule, or policy restricting such access,” reports Raw Story. The legislation would allow the government to tap into any digital aspect of every citizen’s information without a warrant. Banking, business and medical records would be wide open to inspection, as well as personal instant message and e mail communications. This is President Bush’s warrantless wiretapping program on steroids, yet the reaction from the liberal left has been muted to say the least. Furthermore, the reasoning behind the proposal is a farce, since cybersecurity will make the Internet even more vulnerable to attack. According to Jennifer Granick, director of civil liberties at the Electronic Frontier Foundation, the program would “basically establish a path for the bad guys to skip down.” One of the bill’s authors, Democratic Sen. Jay Rockefeller of West Virginia, admitted that the bill was about more than just military or intelligence concerns. “It is a lot more than that. It suddenly gets into the realm of traffic lights and rail networks and water and electricity,” said Rockefeller. 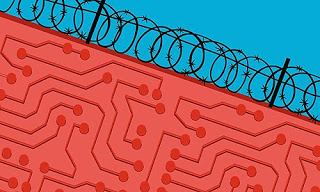