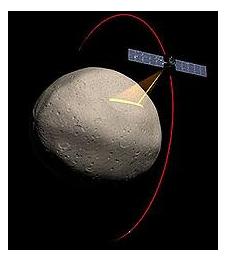 Dawn spacecraft spent past month mapping asteroid 4 Vesta in a 420 mile High Altitude Mapping Orbit (HAMO). An article at Space Daily, "Dawn Journal for October," reveals successful phase of mission completed while the probe, "..has spent most of its time over the illuminated side taking pictures and other scientific measurements and most of the time over the dark side beaming its precious findings back to eager Earthlings...Dawn revolves in a polar orbit around Vesta, passing above the north pole, then traveling over the day side to the south pole, and then soaring north over the night side. Each circuit takes 12.3 hours. Meanwhile, Vesta completes a rotation on its axis every 5.3 hours." The spacecraft has captured more than 7000 images. The northern pole of Vesta, presently in darkness, awaits mapping in a Low Altitude Mapping Orbit (LAMO). The present writer asks where is Richard C Hoagland? Hoagland believes there's "geometric evidence" of ruins on Vesta, discussed a few months ago on Coast to Coast AM! Vesta has remained little more than a fuzzy blob for over 200 years ago, since Heinrich Wilhelm Olbers' discovery in 1807. The Dawn mission has turned our view of Vesta into crystal clarity in a very short time, indeed. Any evidence of geometric anomalies on Vesta's surface will be awaited with much anticipation!