from upi: Civil rights activists say the move to arm District of Columbia Police Department patrol officers with semiautomatic weapons is going overboard. Officers will be given AR-15 rifles this summer as a way to combat dangerous criminals on the streets, The Washington Post reported Saturday. It is reported 352 officers completed training programs to handle the weapons, which have not been used in street patrols until now. "We want to be prepared. I want officers to have what they need to be safe," Police Chief Cathy L. Lanier said.

from san diego union-tribune: Many juniors and seniors were driven to tears – a few to near hysterics – May 26 when a uniformed police officer arrived in several classrooms to notify them that a fellow student had been killed in a drunken-driving accident... About 10 a.m., students were called to the athletic stadium, where they learned that their classmates had not died. There, a group of seniors, police officers and firefighters staged a startlingly realistic alcohol-induced fatal car crash. The students who had purportedly died portrayed ghostly apparitions encircling the scene.

from press tv: Greece and France have opened joint naval and air military exercises, along with Cyprus off the coast of the divided Mediterranean island. The search and rescue operations which will be held until June 6, was codenamed "Argonaut" and are the first between the three countries, according to the Cyprus defense ministry.

may most violent month in afghanistan since 2001

from thinkprogress: McClatchy reports that according to “an insightful analysis” by former Joint Chiefs of Staff senior intelligence officer John McCreary, “May saw more violence than any other month since the 2001 U.S. intervention that toppled the Taliban and forced Osama bin Laden and his followers to flee into Pakistan.” From McCreary’s analysis: April featured 199 violent incidents in 86 districts, making it the most lethal April in the six year conflict. May featured 214 incidents of violence in over 100 districts, also a new six-year total for May and the highest single monthly total. Despite official efforts to spotlight improvement, the spring offensive thus far is worse than last year’s spring offensive. The security situation has deteriorated again.

US & canada team up for 'frontier sentinel'

from union leader: About 3,000 people from Canadian and U.S. Military forces, and government civilian agencies will take part in a training exercise testing responses to a terrorist mine explosion off the Seacoast. A full-scale training exercise, called Frontier Sentinel, will take place from June 9-13 focusing on maritime homeland security. The scenario will play out along the seacoast from the Portsmouth Naval Shipyard to the U.S. Coast Guard Station in New Castle, according to Lt. Courtney Hillson of the Second Fleet Public Affairs Office.

white house has no info on 100s of kidnapped, executed americans in mexico

from steve watson: The White House has declared that it has no information on any ongoing judicial processes concerning hundreds of kidnappings and murders of American citizens by Mexican drug cartels and gangs between 2005 and 2007. Cybercast News Service specifically asked Press Secretary Dana Perino last Friday for information pertaining to a still operative travel alert issued by the State Department, which warned travelers that violence "equivalent to military small-unit combat" was taking place along the southern U.S. border with Mexico. 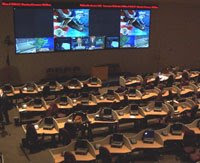 from secrecy news: Fusion centers are collaborative law enforcement and intelligence organizations that were established all over the country after 9/11 to share intelligence and counterterrorism information. But in the absence of a widespread domestic terrorist threat, they have not consistently demonstrated their value, according to a recent study. “Fusion centers emerged almost spontaneously in response to a need by state and local law enforcement for useful and usable intelligence related to the evolving terrorist threat,” observed Milton Nenneman, a Sacramento police officer, in a master’s thesis

(660kb PDF) based on a survey of California fusion centers. But the terrorist threat has turned out to be “insufficient” to justify or sustain the new fusion centers.

Editor’s note: As we have told the readers of Infowars for some time, there is no al-Qaeda and there is no terrorist threat to speak of in the “homeland.” Maybe that’s why Newt Gingrich recently stated at a New York bookstore that there should be “reminder” terrorists attacks in America, to get Americans back in the habit of jumping at shadows and looking under beds. Of course, post 9/11 “fusion centers” will not be closed down as a result. Instead, they will be used to go after another sort of “terrorist,” the kind involved in domestic crime. But then, naturally, this is what the government had in mind all along.

new tech lets la cops 'see through walls'
from knbc: "Most of the time when we do an entry, where we get shot and where the shootings occur is within in the first few seconds and it's at the door."