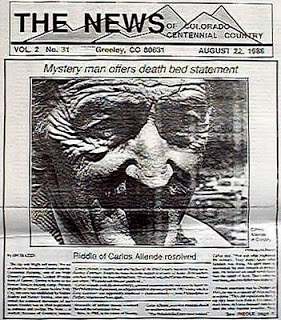 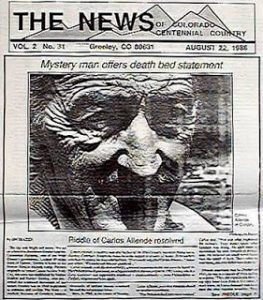 The late October 1943 Philadelphia Experiment is a tale most people set aside mentally as incomprehensible. Carlos Allende remains mysterious as the 1955 letter writer to Morris K Jessup, author of "The Case For The UFO." The ex-merchant marine, a self-reported witness to the USS Eldridge's disappearance, seemed to warrant the respect of Office of Naval Research (ONR) officers, who reprinted copies of Jessup's annotated book believed sent by Allende. The annotated copies became known as the infamous "Varo Edition". This "official" interest by naval authorities only served to deepen the mystery and interest surrounding Allende.

Robert Goerman, a writer, knew he had the best shot of solving the mystery, since many Allende letters were postmarked from his hometown, New Kensington, PA. Goerman stumbled upon the answer in search of his daughter who liked to visit the cat at the Allen's house down the street. When Goerman made an offhand reference to his research, his neighbor Harry Allen completed his sentence for him and admitted he's Carl's father. Goerman knew he had the right person, when Carl M. Allen's seaman's certificate was found with the number, Z-416175, annotated in many of the letters. The writer ended up with a mystery-solving article for FATE magazine in 1980, "Alias Carlos Allende". The article was not well-received, since the conclusion provided an Allen not an Alien. Goerman's search almost overshadows the rest of the story with much of it retold in this Hidden Mysteries episode, "The True Story Of The Philadelphia Experiment".

Carl Allen died in 1994 but still the subject of a small town Greeley, CO newspaper article in 1986, "Death Bed Statement of Carlos Allende". Is the time it took to go from deathbed to his actual passing, suggestive of a convincing storyteller? The present writer gets the impression Allen possessed a high IQ, but a mind with little governor. This is "the Carl" the Allen family knew, somone called upon in class to solve a difficult problem but only managing to pass, "a high IQ but not smart," as one brother put it. Allen's picture even seems to hint his brain was overactive and aging faster than his face below the temples.

The 1986 article relates Albert Einstein's "invisibility" experiment under mundane cover of "degaussing" a ship to make it less vulnerable to magnetic mines. Allende relates Einstein's thought on invisibility, "...a precursor to propulsion beyond the speed of light. Invisibility is nothing more than the precondition to a practical utilization of the magnetic field related to the Einstein Tunnel Propulson system". Einstein was working on a starship propulsion system before there was any NASA, according to Allende.

The storyteller also relates Jessup did not die in 1959--a reported suicide--but killed the person sent to end his life and took his identification. Allende spoke with Jessup a couple of years after "his death", a plausible dose of psyop added to the mystery. Allen aka Allende may have pulled off a whopper, but it's still fascinating to attempt to prove, finally, it's just a story--or is it?