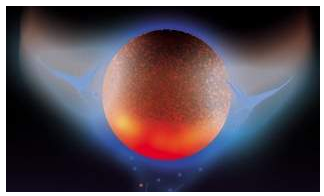 Will we see two Suns in the sky on December 21, 2012? Marshall Masters believes Zecharia Sitchin correct that a celestial body exists, a brown dwarf called Nibiru. Masters has produced "December 21, 2012 - Two Suns in the Sky," a sixty minute video on Nibiru and its passing through our inner solar system. Will sight of two suns be harbinger of dread and doom to befall mankind and Earth? Masters sees cataclysmic period caused by a Nibiru flyby as it swings around Sun from its perihelion (Feb. 14, 2013) to point it crosses solar system ecliptic. A pole shift as Edgar Cayce saw in prophetic vision and devastating solar storms are predicted, and Marshall entertains idea, Annunaki may return to get their fill of gold and young virgins. Masters suspects extraterrestrials warned Earth about imminent threat with 2008 Avebury crop circles.

In an Exopolitics blog entry just this week, Masters adds:

"My analysis of the Avebury Crop Circle 2008 shows that Planet X-Nibiru comes up from the South from behind and to the left of the Sun. It then arcs over the Northern hemisphere of the Sun to its point of perihelion, which is on our side of the Sun at it's 2 o'clock position. So all the videos we're seeing of an object off to the lower left hand side of the Sun at this time are consistent with the Avebury Crop Circle 2008. After August 2012, we'll likely lose sight of Planet X-Nibiru for a few months until December 2012 as it travels behind the Sun."

Nibiru has heated up as topic of interest, again, when Brazilian astronomer Rodney Gomes observed recently orbits of Kuiper Belt objects only make sense if there's another large body out there. In June, BBC-TV broadcast an image of a second large object near Sun. John Moore and Mike Harris, RBN show hosts, ran a two hour Nibiru preparedness special this past week! Hour 1 and Hour 2 are available on You Tube. Nibiru is a wild ride and seems as real as ever! The present writer, despite an open mind, chalked up earthly disturbances to our present space in the galaxy near its ecliptic, where most mass and energy resides in our celestial neighborhood. Will you be looking up more to catch a glimpse of a large shadowy object near our Sun? Seeing will be believing, but then what?