Since 2005, Media Monarchy has covered the real news about politics, health, technology and the occult - all remixed with music and media that matters.
Home > @MediaMonarchy, #DeepFocus

"Momentous elections turn on momentous questions. In 2016 the question [was] clear: What has gotten into people’s heads?" 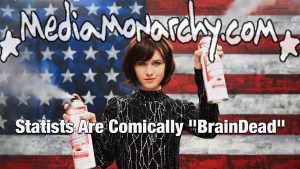 Airing right alongside "America's Next Top President" last year, the single season sci-fi satire from CBS called "BrainDead" shined a spotlight on the left/right paradigm and the "Scanners"-like effect it has on the masses.

Think of it like a mix of "Invasion of the Body Snatchers" and, another satirical political TV show, "Alpha House" - which, itself, is a satire of "House Of Cards". But we already covered that...

Perhaps too gross for comedy fans - but too goofy for horror fans - "BrainDead" really grabbed me in the first episode or two when I realized that the political news clips in the show were as recent as they could possibly be. "Ripped from today's headlines," indeed. They had clips in there of Crooked Hillary, Poor Bernie - and, of course, who we now know as the shocking winner of the 2016 sElection, Trump. (As was already predicted by CBS in 1958 with the TV western called "Trackdown," where "an episode featuring a “Trump” character who came to town claiming that only he could prevent the end of the world by building a wall".)

BrainDead is an American political satire science fiction comedy-drama television series created by Robert and Michelle King. BrainDead stars Mary Elizabeth Winstead as Laurel Healy, a documentary film-maker who takes a job working for her brother Luke (Danny Pino), a U.S. Senator, when the funding for her latest film falls through. Assigned as his new constituency caseworker, she discovers that Washington, D.C. has been invaded by extraterrestrial insects which are eating the brains and taking control of people, including members of Congress and their staffers. Much of the internal comedy of the series was that in the altered reality of Washington DC politics only a few people noticed.

One of the highlights of the series was singer/songwriter Jonathan Coulton who creates fun, musical recaps for each episode that lets you in on what happened, "Previously On 'BrainDead'":

What the show does really, very well is show how obsessed and, yes, insane people get when they become "born again," so to speak. Bugs eat people's brains and make them rabidly political. Whichever team they were already aligned with - the phony R's or the fake D's - they became violently attached to their political dogmas. Dogmas which, as the show also shows, comes from astroturf groups and political false flags.

CBS announced a 13-episode straight-to-series order on July 22, 2015. The show premiered on June 13, 2016. After four episodes, the show moved from its Monday timeslot to Sundays to make room for the network's coverage of the Republican and Democratic National Conventions. The show had a planned four-season arc, which would have seen the bugs then invade Wall Street, Silicon Valley and Hollywood, but on October 17, 2016, CBS cancelled the series after one season.

Although it might have been fun to see the show go to other areas and maybe answer the questions of "Where are these bugs from?" and "What do they really want?" - perhaps it's for the best that it just exists as one little season of a show that showed (or predicatively programmed?) what happens when people stop being nice - and start being statists.