from prison planet: A new piece of legislation set to be re-introduced in Congress by the Democrats under the guise of anti-bullying would reprimand schoolchildren for verbal criticism of their peers in any context, including sexual orientation, religion or simply expression of an opposing idea. The bill echoes federal hate crime legislation about to be debated as Congress enters its first session tomorrow.

The Antibullying Campaign Act of 2005 was rendered obsolete after the recent expiration of Congress but Fox News radio reports that its most ardent champion, Representative Jerrold Nadler of New York, is set to initiate its reintroduction.

The bill outlines a $300 million dollar federal program to target bullies who harass other kids about their sexual orientation, gender identity or religion.

However, the language of the legislation is so loosely defined that it could punish kids for simply verbally disagreeing with another student about so-called "alternative lifestyles."

The bill defines harassment as, "conduct, including verbal conduct, that creates, or would create, a hostile environment by substantially interfering with a student's educational benefits, opportunities, or performance, or with a student's physical or psychological well-being."

Harassment would be taken to include, "any distinguishing characteristic of an individual, including actual or perceived race, color, national origin, ethnicity, religion, disability, sexual orientation, sex, gender identity or expression, family composition or circumstance, or economic circumstance." 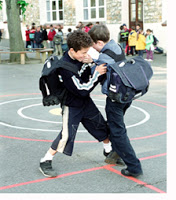 Targeting young children for the words they say and the behavior they exhibit is a reflection of a control freak society gone overboard. In a recent article we highlighted several cases where kindergarten kids as young as five were having sexual harassment "offences" placed on file for pinching another child's bottom.

How toddlers and extremely young children can engage in "sexual harassment" when they don't even know what sex is nor have any sexual feelings matters not to County officials across the country who are following these nightmare socialist style policies by the book.

All of these measures are aimed at getting kids in the system from a very early age and training them that obedient docility is the only conduct that will be tolerated. Perfect automatons for the state who will grow up to accept the mandate that all free speech is offensive to somebody and should therefore be highly regulated.

The anti-bullying legislation dovetails a similarly reinvigorated federal hate crimes law that according to commentators could lead "directly to an end of free speech."

"The Local Law Enforcement Enhancement Act" criminalizes any public criticism of homosexuality, transvestites, witches pedophiles, satanists and others who lead self-professed alternative lifestyles, defining any disagreement and debate with these groups as "hate crime." The bill also classifies "sexist words" used by men during intercourse as "rape," and greases the skids for the criminalizing criticism of the Jewish political lobby in Washington - along with a whole raft of other twilight zone regulations.

Decrees of political correctness and the doctrines of liberal mind control have swamped Europe to the point where Christian ministers are being arrested for reading Bible passages. It is also an illegal offence in Britain to criticize homosexuality.

In November 2002 BBC presenter Robin Page was arrested for saying in a speech a month earlier that the farming community should have the same rights as Muslims, homosexuals and vegetarians. Police traveled from 200 miles away to question Page, before detaining him in a prison cell with dried feces on the wall and later charging him with incitement to racial hatred - simply for stating farmers should have the same rights!

In 2001, Gloucestershire Police set up 'Operation Napkin' in which senior police officers were sent to 'ethnic restaurants' to eat four-course dinners and at the same time listen out for "racist hate speech." Arrests were made as a result of the program.

In January a student who called a mounted policeman's horse "gay" was arrested under section 5 of the Public Order Act for making homophobic remarks and taken to court.

Just last month a 14-year-old school girl was arrested in Manchester for making a "racist comment," after she refused to work with a group of Asians during a science tutorial because none of them spoke English.

Reports of "hate crime raids" where PC subversives are rounded up like terrorists by police are commonplace.

In the U.S., members of the Repent America organization were arrested and criminally charged, with prosecutors attempting to secure 47-year prison sentences, for the crime of reading Bible passages on the street during Philadelphia's 2004 "Outfest" gay pride march.