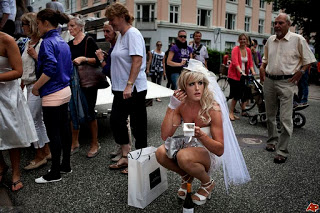 from afp: Danish homosexuals will soon be allowed to marry in the state Evangelical Lutheran Church, Denmark's gender equality and ecclesiastical affairs ministry said Wednesday. "The Danish government has decided that same-sex couples are to be able to marry in church on equal terms with heterosexual couples, and that they will be able to call themselves spouses," the ministry said in a statement. The ministry will submit a bill to parliament on the issue soon.

"We expect to celebrate the first marriage next summer," Ellen Aagaard Petersen, a journalist with the protestant church's official newspaper, told AFP, adding that the vote in parliament and implementation of the law would take about six months.

"All members of the Evangelical Lutheran Church in Denmark must have the opportunity to be married in church regardless of their sexual orientation," the ministry statement said.

Denmark was the first country in the world to allow gay couples to enter into civil unions, or so-called "registered partnerships", on October 1, 1989. Those unions have given homosexuals virtually the same rights as heterosexual couples, but not the right to a religious wedding ceremony.

Since 1997 the Church has offered gay couples a religious blessing of their union, stopping short of the wedding ceremony and they are not registered as a couple on the parish lists.

Pastors will however not be obliged to marry a gay couple if he or she does not want to, Aagaard Petersen said.

"A pastor can say no, but another one will say yes," she explained.

The Evangelical Lutheran Church had 4.5 million members as of January 1, according to its website.