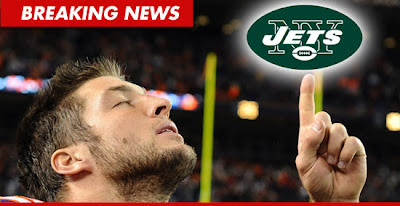 from beliefblog: Tebow, who helped turn the bottom-dwelling Broncos into a playoff team last year, transcended sports with his overt professions of faith and his late game heroics, which led some to believe that God was on the young quarterback’s side. Throughout the season, Tebow’s jersey was flying off the racks and “Tebowing” – the act of getting down on one knee and praying while everyone around you does something else – became to be an internet meme and widely recognized symbol. Tebow quickly became the public face of FRS Company and Jockey; for months, it was hard to click on ESPN without hearing his name. “Tim Tebow seems to have won the hearts of not only football fans in Denver but the people here at large,” said Rob Brendle, pastor at the evangelical Denver United Church. “One of the most exciting aspects of last season was that casual sports fans and those who aren’t even interested in football, like my wife, became captivated by the influence of Tim Tebow... Around the water cooler and in church, there is sadness at the likelihood of his departure,” Brendle said, a few hours before the Jets announcement.