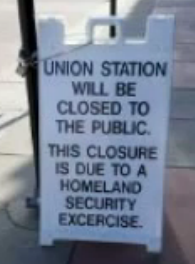 from the intel hub: On Friday September 23rd, a large scale terrorism drill involving 81 agencies will take place in Denver, Colorado. The drill, made possible by a FEMA Homeland Security grant, has been dubbed “Operation Mountain Guardian” and will include military personal. Residents have been warned to expect loud noises and smoke as well as many different emergency and military vehicles.

The fact that most major terror attacks have coincided with “drills” used to confuse and distract first responders not privy to the inside plan has been heavily documented, with the 7/7 attacks in London and 9/11 attacks in New York City being prime examples.

Due to how close this drill is with a documented Elenin alignment date(whether or not you think Elenin will cause destruction or not, the alignment is confirmed by NASA) speculation has run rampant over whether or not this drill will either go live to distract from the 27th or be used to plan for the disaster that will be caused on that day.

This full scale terrorism simulation is planned just 4 days before the much talked about and feared Elenin alignment date. Elenin will apparently be in exact alignment with the Sun, Mercury, and Earth. Past Elenin alignments, though heavily debated, do seem to correlate with major earthquakes around the world. It should also be noted that the idea that comet alignments can cause 6+ earthquakes seems to have been proven multiple times yet mainstream science continues to ignore this valuable warning tool.

Coincidentally, NASA is currently in Denver holding a new exhibit related to the International Space Station and space based research. NASA, an agency started by Nazi party members secretly brought to American under a once top secret program called Operation Paperclip, has a long history of corruption, cover ups, and outright deceptions.

Further adding to the mystery and conspiracy is the fact that President Barack Obama is scheduled to be in Denver on September 27, 2011. What are the chances that 4 days after a full scale terrorism drill and on the day of a major alignment, the president of The United States will be in a city known for its secret bases and eerie symbology?

Strangely enough, leaders throughout the world are on or will be on recess during this alignment date. Do these world leaders as well as U.S. officials know something that most of the public is completely unaware of?

A report originating from Sorcha Faal claims that the real reason for Obama’s Denver trip is his plan to oversee a DEFCON1 'Cocked Pistol' maximum readiness drill.