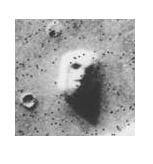 Is the Face on Mars located in the Cydonia region (pictured) that of desposed Nibiruan ruler Alalu? Nibiru, Zecharia Sitchin's 12th Planet, was in the midst of an environmental crisis. A hole in Nibiru's atmosphere threatened it. Alalu gained supremacy by eliminating Lahma, the previous king for his failure to find a solution. Gold particles applied to the breach was recommended as a shield, but Alalu proved likewise ineffectual in getting the job done. Anu, from Lahma's rival bloodline, had pledged allegiance to Alalu but challenged him in face of the grave threat to life. Anu won and the deposed Alalu flees into space in fear of a similar fate to Lahma's. Alalu's flight takes him through the asteroid belt, never before attempted, to Earth where he finds his bargaining chip: gold. A very good narrative video of Alalu's journey can be seen here.

A learned Alalu sends message of his gold discovery back to Nibiru. Anu dispatches a mission to Earth with plans to transport large quantities. Sasha Lessin, in her essay, "Anu Defeats Alalu, Banishes Him To Mars With Anzu," picks up the story with a rematch between Alalu and Anu over who should be King. Anu concedes the validity of Alalu's claim, defeats him again in customary wrestling match. The twice defeated Alalu bites off Anu's genitals in a state of humiliated rage. The deposed king is sent to die on Mars with Anzu, a relative, to look after him. It's determined poisons contained in Alalu's act would eventually kill him. A monument to Alalu fashioned on the face of Mars with beams from spaceships, according to Lessin, is the lasting memorial to a former King's vital discovery in the far way! It's, at the least, an interesting myth and wonder how close it rises to the level of truth?