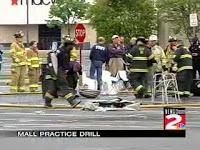 brought to you by daily dose of terror...

from wktv: A practice drill at Sangertown Square Mall this weekend had a lot of people worried that it was the real thing. It was a multi-agency response drill, and teams from New Hartford, Utica, and Willowvale participated. Sunday, the practice scene was an active shooter and a chlorine bomb simulation. Teams practice both response and decontamination. The Police Department intends on conducting more multi-agency exercises in the future.

from pantagraph: Twenty-two members of the Bartonville-based Illinois National Guard 5th Civil Support Team were being evaluated during a formal training exercise simulating a hazardous event at the Coliseum. Guardsmen were clad in hazardous materials suits, and an array of emergency trucks and trailers filled a lot northwest of the building. In Wednesday’s scenario, a “dissident group” attacked people attending a volleyball match the night before, said Lt. Col. Larry Ritter, from U.S. Army North in Fort Sam Houston, Texas.

disaster drill held in downtown pittsburgh
from kdka: Downtown Pittsburgh may look like a disaster area later today, but it's only a drill. The Federal Emergency Management Agency is conducting the drill for dozens of federal, state and local agencies. Approximately 300 participants from 42 federal, state, local and private sector agencies will take part. They will be put to the test on how to handle emergencies, like a terror attack.

firefighters plan emergency drill at jamestown mall
from north county journal: Residents living near Jamestown Mall are advised that the Black Jack Fire Protection District will host a massive emergency drill starting at 8 tomorrow morning (Thursday). Seven different North County fire districts and departments will gather at the south end of the mall, using the vacant Dillard’s store for the drill. Organizers want the residents not to be alarmed by the number of emergency vehicles in the area. The drill presents a simulated disaster scenario involving 15 to 20 “victims.”

from cbs5: The staff at two Sonoma County hospitals will be dressed a little differently this morning. They will be wearing space-walk type protective suits with ventilators as part of a countywide pandemic flu disaster drill. The drill at hospitals, clinics and skilled nursing facilities, referred to as "Code Pandora", entails a hypothetical scenario in which the dangerous H5N1 avian flu has begun to spread rapidly from human to human in countries outside the United States and is considered imminent here.

pandemic drill at washburn university 'a success'
from wibw: An anthrax scare is the pandemic drill held Thursday afternoon on the campus of Washburn University. It was a real life look at what to do in a mass emergency where thousands would need immediate care. Imagine a situation of panic, desperation and confusion, a drill of those that ingested anthrax through food was put to the test.

disaster drill planned in new bedford
from south coast today: The mayor's office and the Bristol County Sheriff's Department will again sponsor the exercise, dubbed "New Bedford Response." It is the second major exercise organized by city and county officials to better prepare emergency responders. In October, a similar exercise was held at the Buttonwood Park Zoo, and presented a food-borne disease outbreak scenario. About 150 professional responders are expected.