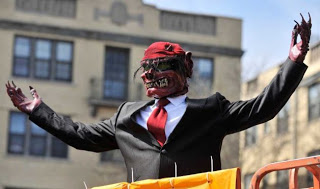 from newstimes.com: Detroit is nearly broke, and the mayor is recovering from surgery. Maybe it's because of an evil red dwarf suspected of casting a spell centuries ago. Some 3,000 people in masks, feathers and beads turned out Sunday for a third annual light-hearted parade to rid Detroit of that devil and his cruel intentions. People who thought force might be necessary carried pitchforks. Shari Lombardo of Grosse Pointe dressed her dog in a tutu. "I read on the (event) website that anything goes; that's obviously true," Lombardo told The Detroit News. "Anything that's new and different is good for the city." The tale goes that a red dwarf cast a spell on Detroit 300 years ago after being struck with a cane by one of the city's founders, Antoine Cadillac. A man dressed as the feared dwarf taunted spectators by declaring, "I own this town."