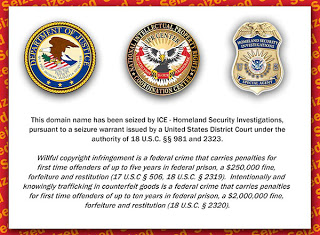 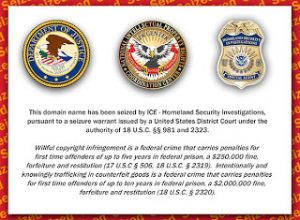 from eric blair: Apparently the Department of Homeland Security is now authorized to rewrite and enforce copyright infringement laws. In a stunning precedent, the recent round of domain seizures to shut down websites that allowed illegal streaming of the Super Bowl, also included a few other websites that were seized simply for linking to infringing content. Mike Masnick of TechDirt, who received and published a DHS seizure affidavit, had this to say in a must-read article:

...the affidavit itself is chock full of legal and technical errors, compounded by assertions-as-facts that seem to have little basis in reality... The biggest problem is that Homeland Security seems to suggest — without a hint of doubt — that merely linking to infringing content is criminal copyright infringement.

Additionally, this type of precedent would seem to massively change the Internet as we know it. What’s next, seizing websites that link to those affiliate sites, like Facebook, Google, or Twitter? Well, that’s the exact question Masnick investigated in his follow-up article, "Homeland Security Tries & Fails To Explain Why Seized Domains Are Different From Google"...

Despite the DHS’s obvious distortion of the law, we are rapidly approaching a day where information can no longer flow freely on the Internet. We better wake up and share these stories with everyone we know, because tyranny is fast approaching. These words written above belong to nobody but the open-source, free Internet. Share and re-post at will.