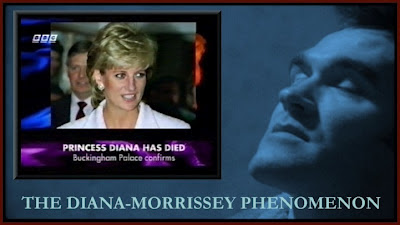 THE DIANA-#MORRISSEY PHENOMENON
August 31, 1978:
19 year-old Steven Morrissey first meets guitarist Johnny Marr,
the one who will launch Morrissey's career several years later
by aggressively enlisting him to co-found a band: The Smiths.
August 31, 1997:
19 years to-the-day since Morrissey met guitarist Johnny Marr,
Princess Diana is killed under circumstances foreshadowed
in Morrissey's work, beginning with an album by The Smiths.

After 15yrs, "Queen of Hearts" Still Mourned In UK

from today.msnbc.msn.com: “Diana is dead,” read the headlines. Most of us remember where we were 15 years ago Friday when we heard the news that Britain’s “Queen of Hearts” had been killed in a car crash. The world looked on in disbelief as news of the paparazzi chase that led to her driver losing control and slamming into a pillar in Paris’ Pont de l’Alma tunnel unfolded. The Princess of Wales, who was just 36, perished along with her friend Dodi Al-Fayed. Images soon emerged of her crushed Mercedes Benz S280 and the stoic young princes at her funeral. Hundreds of Britons and visitors are expected to commemorate the anniversary of her death by paying their respects at her former home, Kensington Palace. “The palace's Golden Gates, site to the sea of flowers and tributes 15 years ago, are as iconic as ever and have been recently re-gilded as part of a £12 million ($19 million) renovation,” said Tim Powell, Digital Media Manager for the Historic Royal Palaces. While the palace is not planning an official commemoration, he said “we also have ‘Diana: glimpses of a modern princess’ — a small display of dresses worn by Diana.”