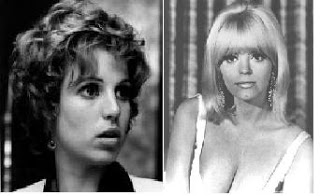 Diane Linkletter (left) assumed place in popular myth of LSD tragedy – suffering delusion she could fly – after her October 4, 1969 suicide jump. Fatherly Art Linkletter, host of House Party TV series, willingly became a spokesman against drugs after loss of his youngest child. A 1970 record, “We Love You Call Collect,” a warning about straying into other lifestyles, won a Grammy. The record features Diane providing rebuttal as it was recorded prior to her “suicide jump”. Diane Linkletter’s cautionary tale – retold throughout the seventies – as Dave McGowan relates in Inside the LC: Part II: “Diane Linkletter, as we all know, sailed out the window of her Shoreham Towers apartment because, in her LSD-addled state, she thought she could fly, or some such thing. We know this because Art himself told us that it was so, and because the story was retold throughout the 1970s as a cautionary tale about the dangers of drugs.” Today, Diane’s story – the popular myth – looks different in a creepy-crawly California way!

Wikipedia entry casts doubt on drug-induced hysteria led to Diane’s jump, “she had no drugs in her system at time of her death”. McGowan completes retelling Diane’s myth with a different twist by pointing out, “What we weren’t told, however, is that Diane (born, curiously enough, on Halloween day, 1948) wasn’t alone when she plunged six stories to her death on the morning of October 4, 1969. Au contraire, she was with a gent by the name of Edward Durston, who, in a completely unexpected turn of events, accompanied actress Carol Wayne to Mexico some 15 years later. Carol, alas, perhaps weighed down by her enormous breasts, managed to drown in barely a foot of water, while Mr. Durston promptly disappeared. As would be expected, he was never questioned by authorities about Wayne’s curious death. After all, it is quite common for the same guy to be the sole witness to two separate ‘accidental’ deaths.”

It appears Diane Linkletter’s “suicide jump” was facilitated and another celebrity Carol Wayne (right), a recurring guest on Johnny Carson, met her untimely death in same individual’s company as Diane. One popular myth – a drug-induced suicide jump – apparently debunked by creepier circumstances and even greater tragedy!