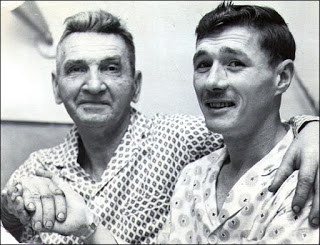 Did Coal Miners Break Through to the Other Side?

Did David Fellin and Hank Throne break on through to the "Other Side" while trapped for 14 days in coal mine cave in?  In an amazing article, "The Second Greatest Story Ever Told," by Ed Conrad, who shares details of two coal miners' out-of-body experiences during their harrowing 14 days entombed, the first five with dim prospects of rescue.  After their rescue on August 27, 1963, Fellin and Throne related same story independently during interviews, in which they "... revealed that Pope John XXIII [who had passed weeks earlier] had appeared to both of them at the same time during their 14-day entombment following an underground cave-in near Hazleton, Pa."  It's also remarkable, Fellin said on two occasions miners had out-of-body experiences and "...insisted he and Throne had been out of their physical bodies at the same time, during which they actually had engaged in conversation." Wow!

"Dr. Kubler-Ross said Fellin's revelations are `'obviously true' and emphasized that she is convinced that Pope John XXIII had much to do with their survival. 'From the moment of the late pope's appearance until they were moved out of the drillholes, he illuminated their cave with a bluish light radiating from him,' she stated."

In a notarized letter towards the end of his life, Fellin revealed how their small enclosure expanded so they were also afforded some movement:

"Fellin testified that the bluish light, which cast no shadow, had provided perfect visibility. He also said the small enclosure where they had been trapped expanded, enabling them to move around.

Fellin further testified that, when the bluish light enabled them to see, he noticed Pope John XXIII at an elevation in the distance, visible only from the waist up.

He said the pontiff, who was 81 when he died, appeared to be about half that age, his arms were folded in front of him and he was grinning at them.

Fellin said Pope John, who had been elected the Catholic church's 262nd pontiff in 1958, was wearing a black cassock 'like that of a poor parish priest. `It wasn't a vision and it wasn't a picture,' he remarked. 'It was him: Pope John! I'd have recognized him anywhere.'"

Another mutual experience of Fellin and Throne included:  "... during their second joint out-of-body journey, Fellin and Throne had come across beautiful marble doors which were open and revealed stairs. Throne told Fellin they should walk up the stairs because they would lead to the surface and safety. However, when Throne was in the process of taking his very first step toward the doors, they suddenly closed and he became extremely angry, threatening to break down the doors. When he did, he and Fellin were returned to their physical bodies."

Conrad makes further observation in article:  "Following that incident, Throne
made no additional out-of-body trips, although Fellin insisted he made
many, many others past the marble doors." Fellin's out-of-body travels included through time to observe building of pyramids and finding himself aboard ship with Christopher Columbus.  Fellin also corrected popular notion of moving through a "tunnel of light" while traveling to the other side,  it's actually a canopy of light not a true tunnel. Fellin felt comfortable in his criticism as a miner and an expert on tunnels.  Fellin and Throne endured "hallucinations" explanation for years, but both passed away, with belief in the reality of their experience right up to time they finally did break on through to the other side!

TAGS: near death experience, out of body experience