Did God Rods Cause US Space Weapon To Hit Russia And Cuba? 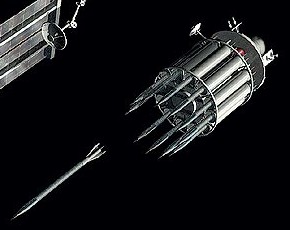 Yoichi Shimatsu, a Hong Kong-based writer, offers kinetic weapon theory in article, “Did God Rods Cause A US Space Weapon, Not Meteors, To Hit Russia And Cuba?“ Shimatsu offers plausible explanation about a space-based kinetic weapon discussed since the early 1980s:

“The Rods from God are depleted uranium rods sheathed in a ceramic foam shell, which prevents friction-caused searing vaporization during re-entry. The DU rods rely on kinetic energy from gravity acceleration reaching supersonic speeds along a close-to vertical trajectory. Upon impact with the Earth’s surface, the ceramic shell is shattered into powder, while the DU becomes a red-hot searing liquid fire that burns through rock and concrete. Turning into dust and gas, the depleted uranium will ignite the air inside any bunker or tunnel, creating shock waves that cause the roof to cave in.”

Readers require little imagination to see where rods, could be one more DU weapon in a related market for weapons industry. Shimatsu contends there’s not great margin for error with heavy weapon in slower orbit assumed to make hitting target more attainable? The present writer found brightness of meteor flash left some doubt about nature of Russian incident? The reasoning offered by Shimatsu merits attention:

“A pair of massive meteorites, each brighter than the Sun, has never been recorded before in the entire history of astral chronologies. Obviously, the bus-size objects that fell from the sky are man-made and not freaks of nature. While it is too early yet for a conclusive determination, one scenario can explain the twin disasters, and that is a free fall of a U.S. Air Force orbital weapons platform loaded with super-heavy ‘God Rods’… One problem of near-geostationary orbit…is the massive weight of the God Rod canisters aboard the space bus. With the slightest miscalculation of minimum orbital momentum, the space-based weapons platform tumbles into free fall.”

Did a miscalculation or a mechanical problem cause a bus-sized weapons platform to free ball back to Earth?  It makes sense, unfortunately, as just another venue to deploy seeming ubiquitous depleted uranium stockpiles!