did a government study just prove that bpa is safe? 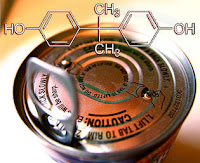 from grist: Though it has dropped from the headlines recently, the bisphenol A discussion continues to rage. California is one Jerry Brown signature away from a partial ban of the chemical, which is used in everything from canned goods to PVC plastic to cash register receipts. There is ample evidence that BPA, an endocrine disruptor, has been linked to various ills, including diabetes, cancer and heart disease. Some scientists are even raising questions about the damage it's doing to our oceans. And, despite FDA footdragging on the issue, the government is worried. The National Institutes of Health recently initiated a $30 million research program (though not without some controversy) to examine the growing risks and make a final call on BPA's safety.

Now, a new study by U.S. government scientists purports to debunk the entire BPA threat. It claims that BPA poses no risk whatsoever and goes so far as to conclude that every previous study that found otherwise was fundamentally flawed. If true, that would be great news. Getting BPA off the toxic chemical list would make everyone's life a whole lot easier. So I contacted experts in BPA research to see if this study was all it was cracked up to be. Their answer: No way. They expressed serious concerns, if not outrage, over the study's broad conclusions and went so far as to question its validity.