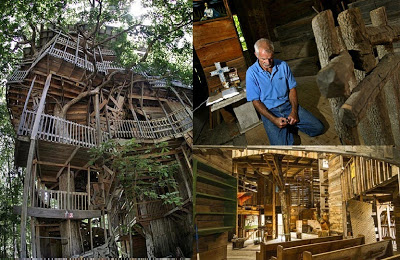 Minister Horace Burgess (pictured) received divine inspiration, in 1993, to build well a tree house Church in Tennessee. "...Burgess was praying when god told him, 'If you build a tree house, I’ll see that you never run out of material' Inspired by this vision of god, the quiet minister set out to build the largest treehouse in the world. Located just outside of Crossville, Tennessee, the 97-foot-tall tree house and church is supported by a still-living 80-foot-tall white oak tree with a 12-foot diameter base, relying on six other oaks for support," as reported in Atlas Obscura. In another USA Today article, Burgess describes divine moment, "the treehouse church with all of its elements came to Burgess in a vision from God when he was 'wide awake' and lasted for only four seconds. But the instructions were clear. 'It had the basketball court in the sanctuary. I saw it like a slide show, and it showed me the podium, which rises like four crosses, two for the thieves, one for Christ, and the other cross is the one we all must bear individually,' he said." You are welcome to stop by if you're ever near Crossville, halfway between Nashville and Knoxville, off Interstate 40 in eastern Tennessee.   A homemade sign at the bottom of the tree house reads: "Welcome friends."