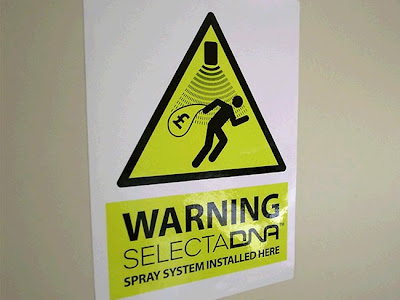 from news.com.au: McDonald's restaurants are fighting back against thieves by blasting suspected robbers with an invisible DNA spray as they attempt to flee. The spray, which remains on the suspect’s skin for two weeks and on clothes for up to six months, has been introduced in some of the chain’s busiest NSW stores... If the SelectaDNA “forensic marking” spray proves successful in apprehending bandits, McDonald’s will introduce the system across all its 780 Australian outlets. Developed in the United Kingdom by a police officer and a chemist, the spray has been used by McDonald’s outlets in Britain and Europe. Each outlet keeps the details of its distribution a close secret, but one McDonald’s restaurant in The Netherlands installed above the main door an orange device which was electronically linked to a panic alarm system. Staff could activate the device in an emergency... The spray contains a synthetic DNA strand composed of 60 variable chromosomes, said SelectaDNA director David Morrissey. “SelectaDNA is non-toxic, non-allergenic and perfectly safe to deploy. It meets all Australian standards,” he said.