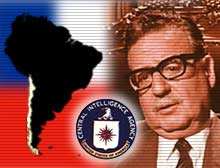 just in case you've forgotten... dead dictator pinochet, was installed by the CIA as part of operation condor on one of our many other september 11th events...

from cnn (november 13, 2000): U.S. officials released documents on Monday acknowledging the CIA had provided covert aid 30 years ago to undermine Chile's government, but analysts say some of the most important documents have not yet been made public.

One document, Kornbluh said, indicates that in 1991 the CIA destroyed a file on Manuel Contreras, the former head of Chile's secret police now serving a sentence for the 1976 car bombing in Washington that killed Orlando Letelier, a prominent Chilean opposition leader. Letelier's American assistant Ronni Moffitt also died in the blast.

CIA officials have said the file would not have information useful to U.S. Justice Department investigators, who are trying to determine whether Gen. Augusto Pinochet, who toppled Chile's president and then ruled the country for 17 years, also should be indicted for Letelier's murder.

"One of the key questions raised by this document is why that file was destroyed ... and what was in it that was destroyed," Kornbluh said.

"We cannot have a full record until all the documents are released," Kornbluh said. CIA officials, meanwhile, said only a few documents were not released.

U.S. officials released 16,000 government documents on Monday, including a CIA memorandum indicating $1 million in covert aid had been given to Chilean opposition parties in an effort to undermine then-Chilean President Salvador Allende's socialist government.

The United States previously released 7,000 records regarding its involvement leading up to the September 11, 1973, coup led by Pinochet that toppled Allende.

Many of the documents, however, have been blacked out to protect sensitive information. U.S. President Bill Clinton had ordered in February 1999 that the documents be made public.

"Today, we are closer than we've ever been to the absolute truth of this incident," Tom Blanton, National Security Archive executive director, told CNN.

White House officials said the documents were released to allow the public to determine for itself whether U.S. actions had undermined democracy and human rights in Chile.

"Actions approved by the U.S. government during this period aggravated political polarization and affected Chile's long tradition of democratic elections and respect for the constitutional order and the rule of law," the White House said in a statement.

Among the information contained in the documents released Monday:

• The CIA provided secret funding to Chilean opposition parties in the early 1970s to try to undermine Allende's government.

• The funding had been approved by U.S. officials just three weeks before Allende was toppled by Pinochet.

• The Christian Democratic Party -- now Chile's largest party -- and the Radical Party of the Left had received the money from the CIA. U.S. officials blacked out the names of other recipients.

• The CIA had given Christian Democratic candidates funding as early as 1964.

Senate committee findings
Kornbluh told CNN that the CIA -- which provided $350,000 to help fund the coup -- had not played a direct role in the coup.

CIA officials had previously said the agency had not instigated the coup, but had been aware of military plotting to overthrow Allende.

However, a Senate committee chaired by Sen. Frank Church, D-Idaho, had confirmed that the CIA had participated in covert operations in Chile, and that the agency had attempted to foment a military coup in 1970 after Allende had been elected president.

"It is important to view these events in their proper historical context," CIA spokesman Mark Mansfield said.

"CIA activities were conducted within the framework of what was U.S. policy at the time, and covert actions were undertaken at the direction of the White House and interagency policy coordination committees," Mansfield said. 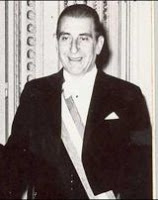 "It may be of interest that in 1964, CIA conducted a (deleted) election operation in Chile (deleted) which contributed to the election of Eduardo Frei to the presidency," said a memo, written before March 1969 elections.

Allende was Frei's main opponent in that election. Frei died in 1982; His son, also named Eduardo Frei, is Chile's immediate past president.

Last year, Clinton ordered U.S. government departments and agencies to find documents to highlight human rights abuses, terrorism and political violence in Chile before and after the coup.

The order was given after Pinochet was arrested in London pending an extradition request by a Spanish judge, who sought to put the former Chilean leader on trial for rights violations.

Pinochet was released due to poor health nearly 500 days later. He was returned to Chile, where he faces trial for abuses that prosecutors allege he committed during his years in power.

Prosecutors have said 3,000 people either were killed or disappeared under Pinochet's administration.

"With these documents, the history of U.S. intervention in Chile and our support for the Pinochet regime can begin to be rewritten," Kornbluh said.