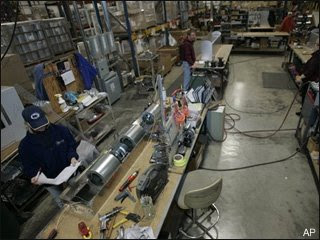 does the united states make anything anymore?

from ap: It may seem like the country that used to make everything is on the brink of making nothing. In January, 207,000 U.S. manufacturing jobs vanished in the largest one-month drop since October 1982. Factory activity is hovering at a 28-year low. Even before the recession, plants were hemorrhaging work to foreign competitors with cheap labor. And some companies were moving production overseas.

But manufacturing in the United States isn't dead or even dying. It's moving upscale, following the biggest profits, and becoming more efficient, just like Henry Ford did when he created the assembly line to make the Model T.

So what's made in the USA these days?

The U.S. sold more than $200 billion worth of aircraft, missiles and space-related equipment in 2007. And $80 billion worth of autos and auto parts. Deere & Co., best known for its bright green and yellow tractors, sold $16.5 billion worth of farming equipment last year, much of it to the rest of the world. Then there's energy products like gas turbines for power plants made by General Electric, computer chips from Intel and fighter jets from Lockheed Martin. Household names like GE, General Motors, IBM, Boeing, Hewlett-Packard are among the largest manufacturers by revenue.