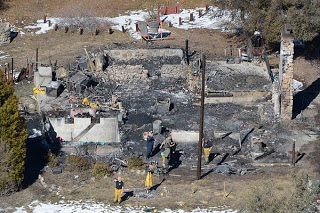 Chris Dorner may continue to play role in popular culture.  In a world passing into eclipse, a dark dystopia, one thought may comfort soul that a cop gone rogue to rage against a clearly corrupt system - may have escaped?  "Chris Dorner’s Wallet Found – Twice!" -an article that sparks a small glimmer of hope:

"So, they’ve found Chris Dorner’s wallet in the burned out cabin [picture] where they pinned him down. Fortunately for them, the wallet survived the fire somehow. This event is quite similar to the passport found in the charred rubble of the World Trade Center after 9/11: 'According to ABC News and the Associated Press, the passport of hijacker Satam Al Suqami was found a few blocks from the WTC.'

Strangely enough, Christopher Dorner’s wallet was also found last Thursday as well, after Chris allegedly tried to steal a boat in San Diego... they found Dorner’s wallet and identification
cards 'at the San Ysidro Point of Entry' near the U.S.-Mexico border.
That same day, a guard at the Point Loma Naval Base told authorities he
had spotted a man matching Dorner’s description trying sneak onto the
base, according to the court records."

A black man raised in mainly white neighborhoods, Dorner suffered twin disadvantages believing he could voice his concerns and they would be heard.  Dorner fell prey to his own naivete, believing system wouldn't retaliate against him for crossing "the blue line."  There are many naive souls and the present writer formerly among them, the system broadcasts message loudly, "don't make waves."  This implicit threat "behave or else" applies to all groups!  Dorner will live on in corner of the present writer's mind, wondering if he did escape?  In much the same spirit as "Elvis has left the building," imagination becomes charged with possibility "Chris Dorner escaped into Mexico to live another day!"