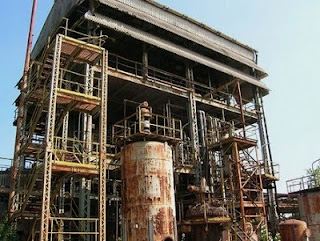 from news junkie post: In what amounts to an incredible hypocrisy, the Dow Chemical Company is sponsoring “Run For Water” events across the globe. The events, organized by environmental organization Live Earth, are taking place tomorrow, April 18, and are supposed to raise global awareness about water scarcity.

“The Dow Chemical Company cannot run from its responsibility for the ongoing impacts of the 1984 Bhopal gas leak by sponsoring Live Earth 'Run For Water' events,” said Amnesty International on Friday.

In Bhopal, central India, thousands of people died and more than 100,000 continue to suffer from serious health problems as a consequence of 1984’s deadly leak of toxic chemicals from a Union Carbide pesticide plant. In 2001, Dow assumed 100 percent ownership of Union Carbide. Since 2001, survivors and many human rights organizations, with Amnesty International in the forefront, have campaigned for Dow to assume its responsibility and address the ongoing impact of the disaster, including the contamination of water by chemical waste. However, Dow is still denying responsibility in Bhopal.

Shortly before midnight on 2 December 1984, thousands of pounds of deadly chemicals leaked from the Union Carbide pesticide plant in Bhopal (see first photograph). Around half a million people were exposed. Between 7,000 and 10,000 died in the immediate aftermath and a further 15,000 died over the next 20 years. More than 25 years later, the site has not been cleaned up, the leak and its impact have not been properly investigated, and more than 100,000 people continue to suffer from serious health problems without receiving proper medical care or compensation. For more than 25 years, both the government of India and Dow have failed to address the human rights abuses that have been the lasting legacy of Bhopal.

“Sponsoring an event that highlights water scarcity while ignoring ongoing problems with access to clean water and medical care, amongst other issues, in Bhopal is at best hypocrisy, at worst, a flagrant attempt by Dow to try to white-wash its image. Dow may be trying to run away from the legacy of Bhopal, but it can’t be allowed to hide behind its sponsorship of 'Run For Water' events. Bhopal raises fundamental questions about the accountability of corporations and the capacity and willingness of governments to address corporate-related human rights abuses,” said Audrey Gaughran, Director of Global Issues at Amnesty International.

Further, Dow’s sponsorship of the 'Run For Water' events poses a serious risk to the credibility of Live Earth. On March 26, Amnesty International wrote to Live Earth to express their concerns about Dow’s involvement in 'Run For Water', but Live Earth did not respond.