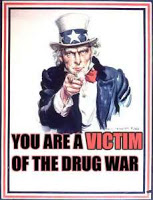 how the 'war on drugs' brought communism to US

from freedom in our time: Alan and Stephne Roos of Bothell, Washington are victims of Communism. The couple - a butcher and dental assistant, respectively - lost their automobiles to the officially sanctioned form of theft called 'asset forfeiture' because their 24-year-old son Thomas has used them to conduct drug transactions.

Neither Alan nor Stephne has been charged with a crime of any kind. Under the Communist premises of the "War on Drugs," it isn't necessary to be convicted of a crime in order to lose one's property, since the State is empowered to seize anything its agents wish to steal, at any time they wish to do so, as long as some "drug nexus" can be established to justify the theft.

from drug war chronicle: A pending marijuana decriminalization effort in Joplin, MO revealed the city's police chief to be a pretty decent guy. This is a textbook example of how a professional public servant regards the democratic process:

"Somebody is going to say, 'you're the chief ... you ought to oppose this thing,'" he said. "Somebody else will say 'you are the chief of police and supposed to be protecting our constitutional rights.' My argument is, 'yep ... you are right.'" [Joplin Globe]

It's such a simple concept, yet it is so often abandoned by law enforcement agencies when citizens work to reform marijuana policy. There's something very creepy about police lobbying to protect their own obscene drug war powers, and it's refreshing to hear a veteran police chief speak in defense of democracy.

marijuana smoker arrested every 38 seconds in US 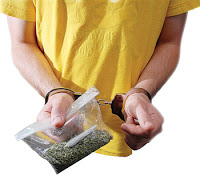 from information liberation: Police arrested a record 829,625 persons for marijuana violations in 2006, according to the Federal Bureau of Investigation's annual Uniform Crime Report, released today. This is the largest total number of annual arrests for pot ever recorded by the FBI. Marijuana arrests now comprise nearly 44 percent of all drug arrests in the United States.

"These numbers belie the myth that police do not target and arrest minor marijuana offenders," said NORML Executive Director Allen St. Pierre, who noted that at current rates, a marijuana smoker is arrested every 38 seconds in America.