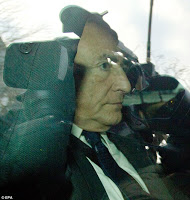 DSK Arrested by French Police for ‘Complicity in Pimping’

from dailymail.co.uk: Strauss-Kahn arrested by French police for 'complicity in pimping' after he admits attending sex parties all over the world... Dominique Strauss-Kahn will be held in custody until 'Wednesday at least' before bail can be considered... Former International Monetary Fund chief denies knowing that the women he slept with were prostitutes... Allegations emerge that married 62-year-old had relationships with at least ten call girls... Dominique Strauss-Kahn was last night being held in police custody as officers questioned him over an international prostitution ring. The disgraced former head of the International Monetary Fund – who lost his job amid claims he tried to rape a New York chambermaid – could face jail over the ‘sex parties’ he has admitted attending around the world. Strauss-Kahn, 62, whose wife Anne Sinclair is standing by him, has made the extraordinary claim that he was unaware the women at the orgies were prostitutes because 'they were naked at the time'.