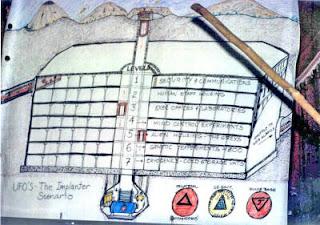 Over twenty years ago, the underground base at Dulce, New Mexico was first exposed to public view with The Dulce Book by Branton. The base suspected to lie under the Archuleta Mesa on the Jicarilla Indian reservation, is rumored to be manned by Reptilians, Greysand humans in tense working relationships. Later, in the nineties, Phil Schneider reported his version of a battle in the late seventies, AKA "the Dulce Wars", which broke out with the Greys and resulted in the death of over sixty men here. A wide range of questionable research takes place underground in utmost secrecy at Dulce. The study of auras, dreams, and telepathy to hideous bio-genetic experiments are conducted on the seven levels. Level Six is called "Nightmare Hall" because of the dark nature of the experiments. Cattle mutilations (mutes) were prevalent around Dulce in the mid-seventies and a possible cross-species fetus discovered in an opened cow's womb before it could be retrieved. Gabe Valdez, former New Mexico state patrol officer, related the discovery on a 2009 UFO Hunters episode.

Paul Bennewitz, a businessman who worked near Kirtland Air Force Base, became a UFO researcher after spotting lights over the Manzano underground nuclear storage area near his home. Bennewitz took pictures of saucers at Dulce when flying on business to the Denver area, he claimed also to monitor communications from the underground base. After bringing these claims to authorities attention, Bennewitz became the target of a disinformation campaign, grew increasingly paranoid and finally institutionalized. Bennewitz, who passed away in 2003, is credited with uncovering much of the Dulce story. Michael Salla provides an in-depth research paper on Paul Bennewitz at Exopolitics.

The Dulce book, as much a compilation of writings from Tal Levesque aka Jason Bishop, Val Valerian aka John Grace and John Lear as well as Branton aka Bruce Alan DeWalton, remains the best introduction. A 2009 UFO Hunters episode with Bill Birnes is well done and entertaining. A brief synopsis of the characters involved in the Dulce story, provided by Norio Hayakawa, are available here. Podcasts at the Jerry Pippin website covering the Dulce base are available here. Dulce fascinates like some tragic, horrible car accident where a person cannot seem to look away.