from ap: A Dutch royal couple acknowledges altering a Wikipedia entry about a 2003 scandal that forced the prince to renounce his claim to the throne.

Prince Johan Friso, son of the reigning Queen Beatrix, and Princess Mabel of Oranje-Nassau are the latest to be embarrassed in a spate of discoveries of vanity changes to Wikipedia entries. Such self-serving amendments are frowned upon in the Web encyclopedia that "anyone can edit."

The original scandal broke in 2003 when Prime Minister Jan Peter Balkenende refused to support the prince's marriage to the princess, then known as Mabel Wisse Smit.

The prime minister said he objected because she had given him "incomplete and incorrect information" about a romantic liaison she once had with a druglord. Wisse Smit later conceded knowing the drug dealer but denied any sexual relationship.

With government approval of the marriage withheld, the prince had to choose between Wisse Smit and his place as second in line to the throne. They married in 2004. 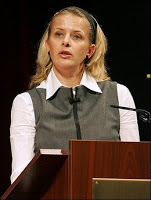 On Jan. 8, 2006, someone using a computer at Huis ten Bosch, the royal palace in The Hague, altered the Wikipedia entry on Wisse Smit that had said she "gave misleading and false information" to Balkenende. The new entry removed the words "and false."

Wikipedia shows the time and IP address — the numerical identifier of each computer on the Internet — of edits made by someone who doesn't sign on with a user name.

After the connection between the 2006 edit and the palace recently circulated in the Dutch media, Friso and Mabel acknowledged they were the revisionists.

"They both made the changes together in order to make the entry match the letter which they sent to the prime minister (explaining why they misled him) in 2003," spokesman Chris Breedveld said Thursday. The couple feel that due to repeated mistakes in the media, an "incorrect version of events has arisen," he said.

Similar self-interested Wikipedia edits have popped up for years in government and business. The finds accelerated this month after a U.S. graduate student developed an online "Wikiscanner" to more easily track the sources.

listen to an interview with virgil griffith, the creator of wikiscanner, on the alex jones show from august 30, 2007.