earth’s magnetic fields cause of bird & fish die off 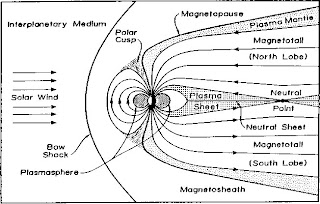 The Earth's magnetic fields are surfacing in the press as an explanation for several recent mass bird and fish die-offs! Donna Pravel writes in, "Earth's Magnetic Fields May Be Causing Bird and Fish Die-Off", about massive breaches detected in the magnetosphere by five NASA Themis spacecraft. Breaches allow highly charged particles to enter and can result in large geomagnetic storms. Pravel offers disruptions in the magnetic fields as disorienting both birds and fish, who use the magnetic fields to navigate, although she leaves open the possibility the fish kills are unrelated. The article fails to convince, under a critical eye, although a geomagnetic storm may explain the trauma to the dead birds. The die offs, at least in Arkansas, seem too specific to be explained by a storm as primarily blackbirds and drum fish died. How did other birds survive? How did other fish manage to navigate? It could be a coincidental disease killed the fish? A mass die off roundup at news.com.au should raise questions in any rational mind?

In June 2007, Themis spacecraft recorded a breach 10 times larger than anticipated. There is an audio version of the article by Tony Phillips as well as a video version available here. The present writer's concern is the growing number of sources capable of taking down our civilization in a single sweeping blackout. Will it be a electromagnetic pulse from a rogue terrorist nuke or ruined circuitry from a solar maximum, a solar flare and/or geomagnetic storm? What else can cause a breach in the magnetosphere? The possible sources of attribution seem on the rise, but how will we know the real source with any certainty in such an event? Is it predictive programming?