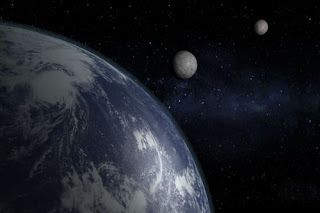 "According to recent scientific speculation, the Earth once had two moons gracing our night skies. 'It's an intriguing idea,' said David Smith, GRAIL's deputy principal investigator at MIT. 'And it would be a way to explain one of the great perplexities of the Earth-Moon system – the Moon's strangely asymmetrical nature. Its near and far sides are substantially different.' The Moon's near side, facing us, is dominated by vast smooth 'seas' of ancient hardened lava. In contrast, the far side is marked by mountainous highlands. Researchers have long struggled to account for the differences, and the 'two moon' theory introduced by Martin Jutzi and Erik Asphaug of the University of California at Santa Cruz is the latest attempt."

Two moons may account for the data but remains theory, nonetheless, an interesting one. Cyber/spacewar first covered speculation on a second moon, last year.