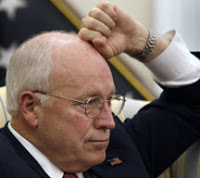 from thinkprogress: Yesterday [jan8] in an interview with the Associated Press’s Deb Reichmann, Vice President Cheney repeatedly insisted that no one anticipated the looming U.S. financial crisis. “I don’t think anybody saw it coming,” he said. He then compared the financial crisis to 9/11, another crisis that supposedly no one predicted:

CHENEY: Did you see it coming? (Laughter.)

REICHMANN: I wasn’t responsible for seeing it coming.

CHENEY: Now, what my point is that I don’t think anybody saw it coming.

Oddly enough, in today’s White House press briefing, Deputy Press Secretary Scott Stanzel insisted that the Bush administration “saw those [financial] problems on the horizon,” but it was Congress’s fault for taking “a long time…to act.” In reality, many economic experts - such as Nouriel Roubini, Dean Baker, and Paul Krugman - did predict the economic crisis; the Bush administration just wasn’t listening to them. In reality, administration officials often turned a “blind eye to the impending crisis.”

martial law, the financial bailout & war
from peter dale scott: It is becoming clear that the bailout measures of late 2008 may have consequences at least as grave for an open society as the response to 9/11 in 2001. Many members of Congress felt coerced into voting against their inclinations, and the normal procedures for orderly consideration of a bill were dispensed with. The excuse for bypassing normal legislative procedures was the existence of an emergency. But one of the most reprehensible features of the legislation, that it allowed Treasury Secretary Henry Paulson to permit bailed-out institutions to use public money for exorbitant salaries and bonuses, was inserted by Paulson after the immediate crisis had passed.

seattle post-intelligencer is put up for sale

from ap: Hearst Corp. put Seattle's oldest newspaper, the Seattle Post-Intelligencer, up for sale on Friday and said that if it can't find a buyer in the next 60 days the paper would likely close or continue to exist only online. If it does become an Internet-only operation, the P-I, as the paper is known locally, would have a "greatly reduced staff," Hearst said in a statement. Hearst is a major media company that also owns TV stations, other newspapers and magazines including Cosmopolitan. "In no case will Hearst continue to publish the P-I in printed form" once the 60 days are up, Hearst said. Steve Swartz, the head of Hearst's newspaper division, broke the news to employees in a meeting Friday. Seattle is one of two major cities on the verge of losing its second daily newspaper as the industry tries to pull out of a tailspin brought on by falling circulation and advertising revenue. Denver's Rocky Mountain News recently put itself up for sale in the face of steep losses and could close if a buyer isn't found soon.

from nytimes: Under pressure from federal authorities, the Swiss bank UBS is closing the hidden offshore accounts of its well-heeled American clients, potentially allowing their secrets to spill into the open.

In a step that would have once been unthinkable in the rarefied world of Swiss banking, UBS will shut about 19,000 accounts that prosecutors suspect have gone undeclared to the Internal Revenue Service.

UBS will transfer the assets to other banks or other divisions within UBS, or will mail checks directly to the account holders, creating paper trails for federal prosecutors who are examining whether UBS clients used such accounts to evade taxes.

The clients now face stark choices: they can cash their checks, and thereby alert the authorities to any potential wrongdoing, or not cash them, effectively losing their money.

Or they can transfer the money to new banks, a procedure which, in the case of foreign banks, requires depositors of more than $10,000 to report the new account to the Treasury Department.

“You can either take that check and throw it in the woods, or deposit it somewhere and get busted,” said a UBS client, who asked not to be named because of the investigations into UBS and its clients. “There’s nowhere to hide.”

retail sales decline for a 6th month
from bloomberg: Sales at U.S. retailers fell more than twice as much as forecast in December as job losses and the lack of credit led Americans to cut back on everything from car purchases to eating out. The 2.7 percent slump marked the sixth straight month of declines, the longest string since comparable records began in 1992, the Commerce Department said today in Washington. Labor Department data showed the global collapse in commodities caused prices of goods imported by the U.S. to fall for a fifth month. Today’s sales figures indicate the hit to spending in the recession is even deeper than estimated, and spurred a sell-off in stocks. The loss of 2.6 million jobs and declining home and stock values are squeezing households, hurting retailers from Wal-Mart Stores Inc. to Tiffany & Co., which today said its holiday sales fell 21 percent and cut its earnings forecast. “There is a major retrenchment going on,” said Joshua Shapiro, chief U.S. economist at Maria Fiorini Ramirez Inc., a New York forecasting firm. “All that policy can do at this stage is cushion this. You can’t short-circuit it.”

video: sneaky new atm skimmer found in pennsylvania
from threat level: An alert bank customer thought the speaker mounted over his bank's ATM looked suspicious, so he called the cops. It turned out to be a skimming device blamed for $300,000 in losses. NBC-10 has the report.