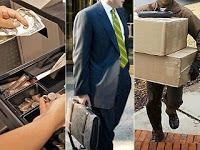 from abcnews: Carol Steinbrecher is a 55-year-old mother of three who, like many Americans, has spent most of her life working hard to provide the best for her family. But today she is part of another group of Americans, one that is growing larger every day: the unemployed. In the first ten months of this year, the nation's employers have cut nearly 1.2 million jobs and the unemployment rate is now at 6.5 percent, the highest it has been since March 1994. The Department of Labor released new data this morning showing that October was the tenth straight month of job losses, with another 240,000 lost just last month.

from uae national: Baron David de Rothschild, the head of the Rothschild bank. The Rothschilds have helped the British government since financing Wellington’s army to fight the French in 1815. “We provide advice on both sides of the balance sheet, and we do it globally. There is no debate that Rothschild is a Jewish family, but we are proud to be in this region. However, it takes time to develop a global footprint.“ Banks will deleverage and there will be a new form of global governance.

from ireport: A protest took place today outside the Icelandic parliament building. Motorcyclists protested in a very symbolic manner, reving their engines in tandem churning their tires till the parliament building seemed to go “up in smoke”. Afterwards a lone protestor managed to make his way to the roof of parliament and raise the Bónus flag, Bónus is Iceland’s staple grocery store whos owners have been highly controversial in the past. The act was testament to what seems to be happening in the halls of power. Iceland needs help but it's not for sale.

from paul joseph watson: The Federal Reserve is facing a lawsuit after it failed to comply with congressional demands for transparency and disclose the destination of at least $2 trillion dollars in bailout funds, underscoring once again the failure of top down socialism and the folly of trusting the foxes to guard the henhouse. “The Federal Reserve is refusing to identify the recipients of almost $2 trillion of emergency loans from American taxpayers or the troubled assets the central bank is accepting as collateral,” reports Bloomberg.

$150b more for aig: US govt
from afp: The US government announced Monday an expanded bailout for insurance giant AIG of more than 150 billion dollars, as the Treasury tapped into emergency funds originally set for banks. The latest bailout plan, the largest in US history, came as AIG burned through billions of dollars of cash and reported a third-quarter loss of 24.47 billion dollars. The original Federal Reserve rescue of 85 billion dollars in mid-September, at the time the largest in corporate history, was expanded by 37.8 billion dollars just a few weeks later, and involved the government acquisition of a 79.9 percent stake in the troubled insurer. But AIG, the world's largest insurer before the global credit crisis, has continued to suffer from soured bets on credit default swaps (CDS) and other complex financial instruments amid a financial crisis that accelerated in October. Under the revised program for AIG announced Monday, the Treasury will replace the entire previous package with a larger, longer-term 152.5 billion dollar program, including a 60 billion dollar five-year loan and 52.5 billion dollars to buy up distressed securities.