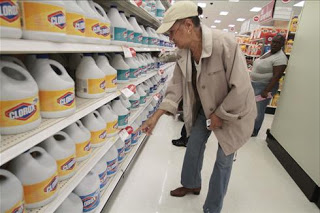 from usatoday: Once a month, just after midnight, the beeping checkout scanners at a Walmart just off Interstate 95 come alive in a chorus of financial desperation. Here and at grocery stores across the country, the chimes come just after food stamps and other monthly government benefits drop into the accounts of shoppers who have been rationing things like milk, ground beef and toilet paper and can finally stock up again. Shoppers mill around the store after 11 p.m., killing time until their accounts are replenished. When midnight strikes, they rush for the checkout counter.

debtors' prisons make a comeback…in the US
from allgov: America’s jails are increasingly becoming de facto debtors’ prisons as the legal system levies more fees than ever on individuals who wind up behind bars simply because they can’t pay their bills or the administrative penalties imposed by judges. Both the Brennan Center for Justice and the American Civil Liberties Union (ACLU) have issued reports on the rise of debt-related incarceration, noting that courts are administering more fees these days as a way to make up for budget shortfalls.

dying communities see salvation in new prisons
from ap: Although rural communities have successfully lobbied for — and built — prisons for years, not many studies have been done on their economic impact. Some studies indicate slight economic gains for some prison towns, according to a Congressional Research Service report in April. Others that have become prison anchors might have not grown as fast as those without prisons. Florence, Colo., where a federal prison complex went up in 1994, was once a major oil producer and gold-smelting center and now has some new businesses. New federal prisons have recently started hiring in West Virginia, which has seen a decline in coal jobs, and in an impoverished farming community in California. Others are being built in Mississippi and Alabama.