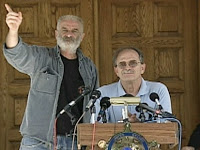 from blacklisted news/abc: Calling the federal agents surrounding his fortified compound "guns for hire," a New Hampshire man convicted of tax evasion vowed today that he and his wife would fight U.S. marshals to the death if they tried to capture them.

"Do not under any circumstances make any attempt on this land. We will not accept any tomfoolery by any criminal element, be it federal, state or local," said Ed Brown in a press conference from the stoop of his concrete-clad home in Plainfield, N.H. "We either walk out of here free or we die."

Brown and his wife, Elaine, were sentenced in absentia in April to serve 63 months in prison for failing to pay more than $1 million in income tax.

The couple, however, insists that there is no law that requires citizens to pay income tax.

"There is no law. We looked and looked," Brown told the press.

Brown and his supporters, including Randy Weaver, leader of the 1992 standoff with ATF agents at Ruby Ridge, Idaho, told the press that the government has unlawfully tricked people into believing they have to pay income tax, knowing full well that such a law would be unconstitutional.

"We will defend it to the death. This is 1776 all over again. You cannot tax someone's labor because that is slavery," Brown said.

Carrying a pistol in his waistband, Brown also insisted that he could not receive a fair trial in a federal court because "the court system falls under freemasonry."

Weaver, whose son was killed by federal agents and who later received a $100,000 settlement from the government, said he was there to support the Browns.

"I'd rather die on my feet right here than die on my knees under this de facto government," he said. "Bring it on."