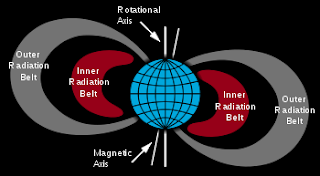 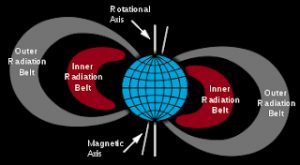 It's been known since the sixties electrons disappear from the Van Allen Belt during solar storms or Coronal Mass Ejections (CMEs). In article, "Solar storms affect Earth's weather?", Vassilis Angelopoulos, a UCLA professor of Earth and space sciences, said "'during the onset of a geomagnetic storm, nearly all the electrons trapped within the radiation belt vanish, only to come back with a vengeance a few hours later.'" The puzzling effect of disappearing electrons left question whether electrons fall into Earth's atmosphere? Orbiting satellites have only recently observed storms and recorded what happens to the electrons. "The data show that while a small amount of the missing energetic electrons did fall into the atmosphere, the vast majority was pushed away from the planet, stripped away from the radiation belt by the onslaught of solar wind particles during the heightened solar activity that generated the magnetic storm itself," summarizes article. Drew Turner, lead author of study recently published in Nature Physics, declares verification of electrons fate an important milestone in understanding Earth's space environment.