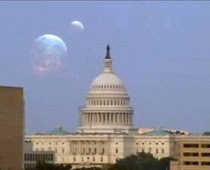 Ground Zero Media's Clyde Lewis provides interesting take on comet Elenin as revealed in the series, "The Event". Lewis admits, "...I literally have tuned out any commentary about Comet Elenin." It's an easily recognizable sentiment in light of overwhelming hype on doomsday scenarios. KXL Ground Zero Live's host notes agitated behavior has now caught his attention, "...whenever there is a comet or some Near earth object coming towards the authorities tend to overreact and there are strange things that go on behind the scenes leading me to believe that even governments and Military get a little unhinged when it comes to space anomalies of this magnitude." Is there more to the hysteria?

Michael Salla, of exopolitics.org, is Lewis' primary source from recent article, "The Event and Comet Elenin," where question posed, "What is the relationship between Comet Elenin and the Event? Perhaps nothing; or, maybe, a very lot indeed." This kind of inquiry is no longer frivolous with past examples of predictive programming in media. In 9-11 lore, "The Lone Gunmen Pilot," is infamous for plot to fly airliner into the World Trade Center. Perhaps of most interest, Bosnian earth scientist Dr Mensur Omerbashich using publicly available tracking software, found correlations between earthquakes and Comet Elenin alignments. Omerbashich's paper on the subject is available in .pdf format here. The paper suggests Elenin is far more massive than a comet, opening door as apparent support for existence of Planet X. Lewis and Salla wonder about possibility?

The TV series was canceled, as conspiracy theorists suggest in Lewis' article, because it got too close to the truth. The talk show host also ties emergency preparations around country as indicative of impending event. Numerology is, also, brought in and provides a "WOW" factor. Lewis implies alignment dates have occult portent, "... Comet Elenin will be at perihelion or the closest to the Sun on 11/9/11 and we will pass directly through its tail in 11/11/11."

Our present dilemma is summarized by Lewis, "...like the TV Show THE EVENT...we will wait and see if we will be renewed for next year...." Everyone seems to be pointing to the fall of 2011 for the event? We only have months to wait and see, whether an earthshaking planet appears in our sky!