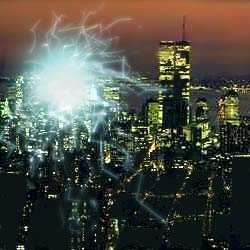 from danger room: It’ll fry pace makers, destroy iPhones, and turn laptops into useless paperweights. It’s the scariest thing most people outside the Washington Beltway have never heard of: electromagnetic pulse weapons. And you can learn all about it starting today at the EMPACT conference in Niagara Falls, New York.

Electromagnetic pulse, or EMP, is a burst of electromagnetic radiation that fries electronics, from satellites to toaster ovens. The effects of a nuclear EMP were first observed after the 1962 Starfish Prime nuclear test, which knocked out satellites and electronics. EMP weapons are specifically designed to maximize this electronics-killing effect, which can be done by detonating a high-altitude nuclear explosion. Though the effect is most commonly associated with a nuclear blast, the U.S. military, among others, has been looking at conventional weapons that harness the EMP effect. Those who worry about these weapons say that a single EMP attack could shut down the continental United States, creating mass havoc caused by the breakdown in infrastructure.

As the conference description notes: “Two Congressional Commissions, the EMP Commission and the Strategic Posture Commission, have warned that terrorists, rogue states, China and Russia could, using a single crude nuclear weapon delivered by a primitive missile, inflict an EMP attack that would cause the collapse of critical civilian infrastructures–such as infrastructures for electric power, telecommunications, transportation, banking and finance, food and water–across the entire continental United States, that are vital alike for the sustenance of our modern society and the survival of its citizens.”

Concerns about EMP weapons have long attracted a devoted band of doomsdayers, including Roscoe Bartlett, the Republican congressman from Maryland, and former representative Curt Weldon, who has warned of plasma attack weapons (a non-nuclear EMP). Both are speakers at the EMPACT conference.

Though well known and a source of lively debate among policy wonks and nuclear weapons scientists for decades, the threat of EMP weapons haven’t made much headway into popular culture (and a number of scientists dispute the danger of such weapons). The organizers of the conference, EMPACT America Inc. are trying to change the popular perception of EMP with the conference, as well as with Armageddon-esque videos like this:

As an interesting aside, the conspiracy-plagued High Frequency Active Auroral Research Program, or HAARP, the radar array in Alaska, has been proposed as a facility that could be used to research ways to “scrub” the upper atmosphere, mitigating the effects of EMP.