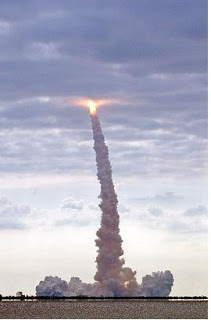 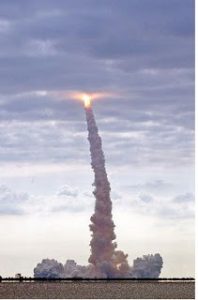 Endeavour, STS-134, launched on time from the Kennedy Space Center at 8:56 am, ET, today. Atlantis is scheduled for launch this summer in the final flight of the Space Shuttle program. You can download a STS-134 Mission Fact Sheet and, if you missed it, you can take in the mission launch here on YouTube. The live commentary is pointed with infobits for viewers. Shuttle rockets are burning 11,000 pounds of fuel per second and the entire package loses half its weight in the first two minutes! What kind of fuel bill is that? You can follow the mission in real-time here.

Conspiracy theorists on the web see a heavy Illuminati signature on the Endeavour mission. You can view one blogger's attempt to look at the numbers at AboveTopSecret.com. It only gets interesting when a comparison is made to the tragic Columbia mission. There are sixteen days separating Columbia's launch until its tragic breakup on February 1, 2003. Endeavour postponed for sixteen days and also scheduled to return on the first of the month, June 1st. The blogger sees inverted 911s throughout.

The present writer strongly suspects secret society ties to NASA and what appears to be twilight language in its naming conventions. A previous post reports what may be coded words or twilight communication. "The ENTERPRISE of the United States (COLUMBIA), shall be destroyed after completing its mission. CHALLENGERs shall be destroyed before completing their mission and replaced by our last British led ENDEAVOUR, for the DISCOVERY of ATLANTIS". Endeavour is named after the ship of British Explorer Captain James Cook and wonder where it will lead?