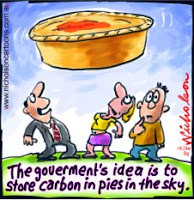 from new york times: A powerful House Democrat said on Friday that he planned to propose a steep new “carbon tax” that would raise the cost of burning oil, gas and coal, in a move that could shake up the political debate on global warming.

The proposal came from Representative John D. Dingell of Michigan, chairman of the House Energy and Commerce Committee, and it runs directly counter to the view of most Democrats that any tax on energy would be a politically disastrous approach to slowing global warming.

But Mr. Dingell, in an interview to be broadcast Sunday on C-Span, suggested that his goal was to show that Americans are not willing to face the real cost of reducing carbon dioxide emissions. His message appeared to be that Democratic leaders were setting unrealistic legislative goals.

“I sincerely doubt that the American people will be willing to pay what this is really going to cost them,” said Mr. Dingell, whose committee will be drafting a broad bill on climate change this fall.

“I will be introducing in the next little bit a carbon tax bill, just to sort of see how people think about this,” he continued. “When you see the criticism I get, I think you’ll see the answer to your question.”