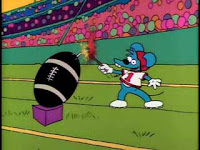 from i-newswire: Multiple reports that internet cables connecting Iran to the rest of the world have been “cut” are raising suspicions in the minds of experts on 9/11 that something serious may be in the works. According to James H. Fetzer, founder of Scholars for 9/11 Truth, “Prior to 9/11, the FBI - our own FBI - shut down Arab Muslim web sites. Some of us fear that internet access may have been deliberately severed to isolate Iran and make it difficult to communicate in response to a ‘false flag’ attack in the United States, possibly during the Super Bowl, an attack upon Iran, or both.”

and now for some 'good news'

pentagon panel: US must sell 'good news'
from danger room: "The strategic communication problem is to make good news as entertaining as bad news," says a new report by the Defense Science Board

and some bad news updates... 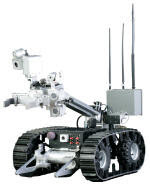 from washington technology: Arizona law enforcement agencies will use robots to help maintain security at the Super Bowl... Northrop Grumman Corp. will provide support and repair services for the robots, produced by its Remotec Inc. division.

super bowl of tyranny
from truthnews: It seems the Ministry of Homeland Security will use whatever excuse to blur the lines between local police and the military, thus finally laying to rest the idea put forth in the Posse Comitatus Act of 1878...

As Los Angeles Business notes, there will be “800 officers from numerous agencies” on hand, just in case Osama makes an appearance...

As the cops in Mexico and Canada will merge soon enough, that is if our rulers have their way with the NAU, it makes sense “Vancouver 2010 security police are at the Super Bowl in Phoenix,” as The Province explains, “embedded” with the above melange, studying “surveillance and security” and likely comparing notes.

In all of this, it seems football comes in second, as the point is to send a message: you live in a police state now. It is high time you get accustomed to cops decked out like combat soldiers, killer robots in the street, surveillance cameras on every corner, blimps, F-16s, spot searches, frisking — and a jolt or two from a taser if you misbehave and are slow to obey barked commands — and all manner of high-tech “security” against ill-defined if not cartoonish enemies and invisible threats that will never materialize.

But then, of course, you are the enemy, not Osama and his dour band of Muslim cave dwellers. In a police state, the people are always the enemy. In a dictatorship, you will follow orders or will be made to pay the price.

damn, i should've thrown down some money on this... when the phone-tapping, ip-spoofing spook-in-charge makes predictions, he probably knows what he's talking about... 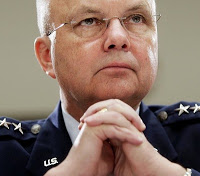 from danger room: Director of Central Intelligence Gen. Mike Hayden has become a divisive figure, for overseeing warrantless wiretapping, for helping produce a controversial intelligence estimate on Iran's nukes, for his seeming ignorance of the 4th amendment, and for ordering an investigation into his own Inspector General.

But Hayden may have made his most contentious move yet: he's picked the New York Giants to win the Super Bowl.

ESPN.com asked a number of celebrities how they thought Sunday's game would turn out. Hayden's response:

Giants, 28-24. The spread favors the Pats, but careful intelligence work looks beyond the obvious. The Giants are hot now. Three playoff wins on the road (like the Steelers before Super Bowl XL). Regular season finale shows they match up well against the Pats. Besides, nobody's perfect!