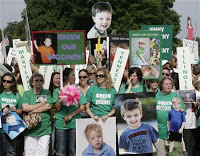 from reuters: Health officials have called off plans for a study examining a controversial type of treatment that some autism activists have touted as alternative medical therapy for children with the condition. The National Institute of Mental Health, or NIMH, part of the U.S. National Institutes of Health, said in a statement on Wednesday that it has canceled a study aimed at assessing the effectiveness of a treatment called chelation. Chelation (pronounced key-LAY-shun) is a type of therapy in which a man-made amino acid, called EDTA, is added to the blood, and it has been used to treat heavy metal poisoning. Some autism activists have advocated it on the theory - rejected by most scientists - that autism is triggered by exposure to mercury, a heavy metal, from childhood vaccines. 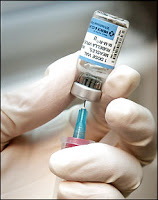 from washington post: A common vaccine given to children to protect them against measles, mumps and rubella is not linked to autism, a study published yesterday concludes. The findings contradict earlier research that had fueled fears of a possible link between childhood vaccinations and a steep increase in autism diagnoses. In February 1998, the Lancet journal published a study by British researcher Andrew Wakefield of 12 children with autism and other behavioral problems that suggested the onset of their behavioral abnormalities was linked to receiving the MMR (measles, mumps, rubella) vaccine. The new study comes as the U.S. Court of Federal Claims in Washington is in the midst of evaluating evidence on whether children's vaccines are implicated in causing autism. A special master is evaluating three different kinds of claims - two of which specifically link the MMR vaccine with autism.

bisphenol a may impair learning & memory
from globe & mail: Exposure to bisphenol A, the hormonally active chemical used to make the linings of most tin cans and hard plastic bottles, may be able to alter brain function, impairing the ability to learn and remember, according to a new study by researchers from Canada and the United States. The study, conducted on monkeys, whose brain development is similar to that of humans, raises the possibility that ailments such as depression, Alzheimer's disease and schizophrenia may be linked to the controversial chemical. Almost all people living in industrialized societies are exposed to BPA as a result of trace amounts leaking from food and beverage containers.

gardasil made mandatory for immigrants 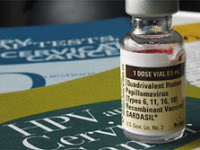 from steve watson: Immigrants seeking permanent legal residency in the U.S. are now mandated to take an expensive and controversial vaccine that has been linked with thousands of serious complaints and several deaths. The Human Papillomavirus (HPV) vaccine — known as Gardasil — is one of five the U.S. Citizenship and Immigration Services recently added to the required list, reports Fox 8 News. A press release from the U.S. Citizenship and Immigration Services Agency confirms that the requirements for the vaccine went into effect on July 1, 2008. The regulation represents a total dismissal of the recommendation of Dr. Jon Abramson, chairman of the Centers for Disease Control and Prevention’s advisory committee on immunization practices. In February 2007, Abramson said that he and the 15-member panel at the CDC opposed making Gardasil mandatory because the sexually transmitted HPV is not a contagious disease like measles or chicken pox. At $162 per dose, the three-dose vaccine is set to make millions in profits for Gardasil manufacturer Merck, a company that has a history of both lobbying intensely for state mandates and entering into crony deals to hoodwink Americans into believing HPV vaccinations are compulsory.

drugs affect more drinking water
from ap: Testing prompted by an Associated Press story that revealed trace amounts of pharmaceuticals in drinking water supplies has shown that more Americans are affected by the problem than previously thought — at least 46 million. That's up from 41 million people reported by the AP in March as part of an investigation into the presence of pharmaceuticals in the nation's waterways. The AP stories prompted federal and local legislative hearings, brought about calls for mandatory testing and disclosure, and led officials in at least 27 additional metropolitan areas to analyze their drinking water. Positive tests were reported in 17 cases, including Reno, Nev., Savannah, Ga., Colorado Springs, Colo., and Huntsville, Ala. Results are pending in three others.

from parallel normal: Several compounds in cannabis are known to kill bacteria. Now Italian scientists believe pot can take on today’s superbugs. Anti-bacterial cannabinoids might also “provide a more environmentally-friendly alternative to synthetic antibacterial substances now widely used in personal care items, including soaps and cosmetics,” according to an announcement from the American Chemical Society. The ACS also suggests that marijuana-derived meds can be made without THC, pot’s primary psychoactive substance.

from daily mail: Children as young as five should be taught to understand the pleasures of gay sex, according to leaders of a taxpayer-funded education project. Heads of the project have set themselves a goal of 'creating primary classrooms where queer sexualities are affirmed and celebrated'. The ambition was revealed in documents prepared for the No Outsiders project run by researchers from universities and backed with £600,000 of public money provided by the Economic and Social Research Council.