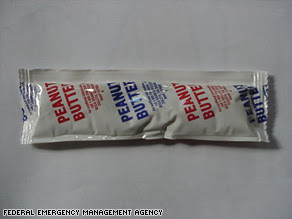 from mcclatchy: Kentucky Emergency Management officials are getting Kentuckians another source of prepared meals after the Federal Emergency Management Agency announced that some meal kits might contain contaminated peanut butter. The FEMA meal kits were distributed to storm victims in Kentucky during the past week. The kits might contain peanut butter that is part of a national recall because of salmonella. The kits are manufactured by Red Cloud Food Services Inc. under the Standing Rock label. The only portion of the meals that might pose a danger is a packet of peanut butter, according to FEMA. The peanut butter packet should be thrown away, officials said. Beshear announced Thursday that the Kentucky officials are contracting with a private food vendor to secure hundreds of thousands of prepared meals. They also are handing out fliers shelters and distribution centers about the problem.

could ecoterrorists let slip the bugs of war?

wv turkey farm fired more than 3 indicted workers
from examiner: Though only three people have been indicted for alleged animal cruelty at a West Virginia turkey farm, the company says others who worked there also were fired. Aviagen Turkeys Inc. spokeswoman Sandi Hofmann wouldn't release details Friday but said the firings went beyond the workers charged in a 19-count indictment in Greenbrier County this week. Norfolk, Va.-based People for the Ethical Treatment of Animals, which secretly videotaped bird-stomping and other violent acts last fall, claims Aviagen continues to employ workers it saw mistreating birds at the Lewisburg turkey farm. Hofmann disputes that, saying several other workers were fired for violating internal animal welfare policies. Aviagen Turkeys is a subsidiary of Alabama-based Aviagen Inc.

ailing wv towns with bad water sue over slurry
from examiner: Maria Lambert says she never had clear, odorless, tasteless water. Sometimes it felt greasy or smelled of rotten eggs. But the day a blast from a nearby strip mine shook her southern West Virginia home, it got worse. "Immediately, there was slime that ran through the ice maker. It just looked like orange Jell-O," Lambert recalls. "It wasn't gobs, but if you would stick your glass under the spigot to get some water, you'd see it was there." Now, she and 250 people with orange and black water in their taps, tubs and toilets are suing eight coal companies they believe poisoned their wells by pumping mine wastes into former underground mines. The lawsuit filed recently in Boone County Circuit Court claims decades of surface and underground mining activities near the communities of Prenter and Seth fractured the geologic strata that had contained the slurry, a byproduct of cleaning the coal. It claims the network of cracks created a pathway for the slurry to contaminate the aquifer.

uk teens have lower iq's than their counterparts 30yrs ago

14 cited for trespassing during coal mine protest in wv
from examiner: Fourteen protesters who claim a Massey Energy Co. surface mine in West Virginia could cause flooding and harm a nearby town were ticketed for trespassing Tuesday, state police said. Five of the protesters chained themselves to heavy equipment at Massey's Beetree Surface Mine on Coal River Mountain, said Sgt. Michael Baylous, who described the participants as peaceful. Eight more were cited when they insisted on seeing a company representative after delivering a letter addressed to Massey chief Don Blankenship and subsidiary Marfork Coal Co., Baylous said. A photographer who allegedly trespassed to shoot pictures of the protest also was cited, he said. Five protesters were identified as members of Climate Ground Zero and pan-Appalachian Mountain Justice, according to news release issued by the groups.

bill gates releases mosquitoes at conference for malaria awareness
from afp: Microsoft founder turned disease-battling philanthropist Bill Gates loosed mosquitoes at an elite Technology, Entertainment, Design (TED) Conference to make a point about the deadly sting of malaria. "Malaria is spread by mosquitoes," Gates said while opening a jar onstage at a gathering known to attract technology kings, politicians, and Hollywood stars. "I brought some. Here I'll let them roam around. There is no reason only poor people should be infected." Gates waited a minute or so before assuring the audience the liberated insects were malaria-free. TED curator Chris Anderson fired back at the legendary computer software maker, joking that the headline for the video of his talk to be posted online at Ted.com would be "Gates releases more bugs into the world."

from paul joseph watson: A massive program with its tentacles embedded into almost every corner of education and popular culture is underway to use the “green” agenda to brainwash children and turn them against their own parents, as the state moves towards the creation of a Stasi-style informant society using methods that have been repeated in every totalitarian state throughout history. The controversy surrounding Al Gore’s comments during a speech at the University of Maryland Presidential Youth Inaugural Conference, during which he pitted children against their parents by telling them they “know more” about global warming, is merely the tip of the iceberg of a top-down movement that is mimicking a technique that dictatorships have practiced throughout history - the exploitation and brainwashing of children to turn them into Maoist, Stasi, Hitler Youth-style informants and enforcers against their own family and community. Talking head Glenn Beck was spooked about the historical legacy that Gore is following in brainwashing kids to assume an adversarial position against their own parents in the interests of the state. “I’m trying to think where else this has been done – Soviet Russia, Nazi, Germany, Mussolini’s Italy,” Beck said. “In fact, the Nazis took an extra step. Not only did they indoctrinate the kids and tell them you’re probably right, you know but your parents don’t; in fact, here’s the next step: Why don’t you tell us what your parents are telling you. Are we having the new Hitler youth? Is that what this is? The new Hitler youth? I’m sorry, that’s so politically incorrect - the new green guard. Man your station, 12-year-olds, your parents just don’t know.”