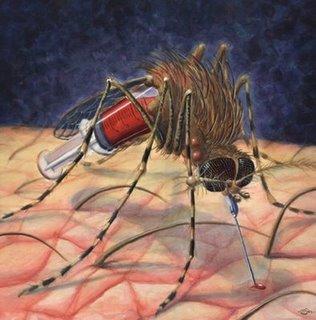 eugenicists unleash ‘flying syringes’ to ‘save’ humans from disease

from new scientist: An outdoor trial of mosquitoes genetically engineered to sabotage Aedes aegypti mosquitoes, which spread dengue fever, has been declared a success by scientists in the field. The trial is first time genetically modified mosquitoes have been released in the wild. The strategy promises to provide a new weapon against dengue, a disease that infects 50 million people annually and kills 25,000. In the past year, dengue has reappeared in the US for the first time in 65 years, and in southern Europe. By the end of the six-month trial on a 16-hectare plot, populations of the native insects, which spread the dengue virus had plummeted. "It's a proof of principle, that it works," says Angela Harris of the Mosquito Control and Research Unit on the Caribbean island of Grand Cayman, where the trial took place. The MCRU conducted the trial with Oxitec, the company in Oxford, UK, that bred the GM mosquitoes.