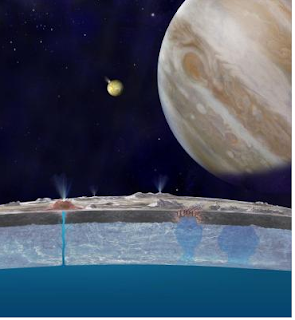 Michael E Brown, Caltech astronomer and Kevin Hand from the Jet Propulsion Lab (JPL) "... have found the strongest evidence yet that salty water from the vast liquid ocean beneath Europa's frozen exterior actually makes its way to
the surface," reports The Daily Galaxy.  "'We now have evidence that Europa's ocean is not isolated—that the ocean
and the surface talk to each other and exchange chemicals,' says Brown,
the Richard and Barbara Rosenberg Professor and professor of planetary
astronomy at Caltech...Hand emphasizes that, from an astrobiology standpoint, Europa is considered a premier target in the search for life beyond Earth..." A description of Europa supplied in article: "Europa's ocean is thought to be 100 kilometers deep and covers the entire globe. The moon remains locked in relation to Jupiter, with the same hemisphere always leading and the other trailing in its orbit. The leading hemisphere has a yellowish appearance, while the trailing hemisphere seems to be splattered and streaked with a red material. The spectroscopic data from that red side has been a cause of scientific debate for 15 years. It is thought that one of Jupiter's largest moons, Io, spews volcanic sulfur from its atmosphere, and Jupiter's strong magnetic field sends some of that sulfur hurtling toward the trailing hemisphere of Europa, where it sticks." The read streaks are believed to be magnesium. Brown also suspects Europa's salty ocean resembles Earth's ocean.