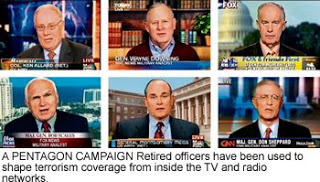 from thinkprogress: Yesterday, the Department of Defense Inspector General released its report [10.8mb PDF] on the military analyst program first revealed by the New York Times last April. The report said there was “insufficient evidence to conclude that OASD(PA) conceived of or undertook the type of disciplined public relations effort” alleged by the program’s critics. The report concluded that the program “was not a secret or covert effort,” and thus not propaganda, which it defined as activities that “are covert, that is, the communications do not reveal to the target audience the government’s role in sponsoring the material.” However, the report never addressed the fact that the news networks never disclosed that their military analysts were being briefed by the Pentagon. Indeed, the report seemed to accept such non-disclosure as business as usual.