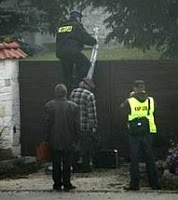 from raw story: BBC News reports that a group of excommunicated Roman Catholic nuns has been evicted by riot police from a convent in eastern Poland which they had been occupying illegally for the last two years.

The Vatican expelled ten nuns from the Sisters of Bethany order a year ago, when they refused to replace their mother superior, who says she sees visions of the Holy Spirit. They were then joined by about 50 novices and a renegade Franciscan monk who reportedly set himself up as a guru.

Electrical and gas supplies to the convent were cut off last March, and Polish officials ordered an investigation in June, after a newspaper claimed the nuns had threatened to commit mass suicide.

According to the Telegraph, “they adopted a siege mentality, hired security guards, changed the locks on the gates and shunned all contact with the outside world.”

Police officers used a ladder to scale the convent walls, removed the women, some of whom swore at the police and called them “servants of Satan,” and arrested the mother superior and the renegade monk.

The following videos are from BBC’s BBC World, broadcast on October 11, 2007